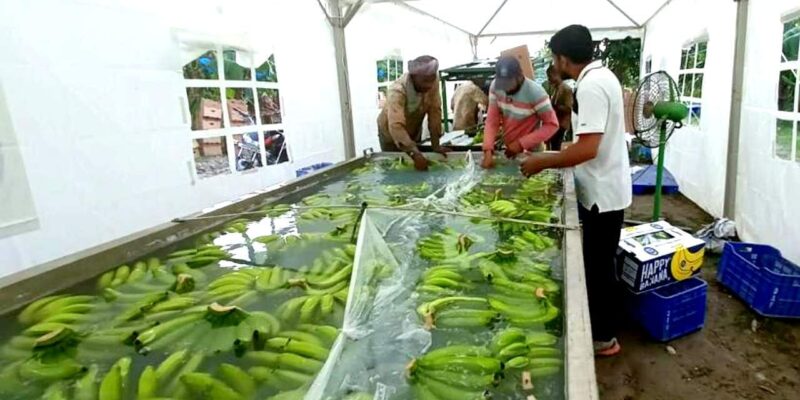 Bananas were exported from UP.

Banana is one of the most popular fruits in the world. It is the fourth most important food crop in terms of production after wheat, rice and maize. It is the world’s favorite fruit in terms of quantity consumed. It is not only eaten raw, but also used in making juices, sauces, baked goods and various dishes. India produces 30 per cent of the global banana production. The Agricultural and Processed Food Products Export Development Authority (APEDA) worked flawlessly, keeping in mind the potential to boost agricultural exports from Uttar Pradesh. In this sequence, the first batch of bananas was exported from Uttar Pradesh on 14 October.

This consignment of bananas was dispatched to Iran by M/s-Desai Agro Foods Pvt Ltd, which will be sent by sea. A program was organized for this, in which Additional Chief Secretary Agriculture and Marketing was specially present. Farmers of Lakhimpur, Bareilly and Lucknow also actively participated in the function to be a part of this historic moment. The product was procured directly from the farmers of Palia Kalan (Lakhimpur), brought to Lucknow and packed at Mango Packhouse in Lucknow.

Dr. Shailendra Rajan, director of the Central Institute of Subtropical Horticulture (CISH), said that a total of 40 metric tons of bananas in two 40-feet referrer containers were sent to the Iranian market on a trial basis. This will be the first time that the international market will taste the sweetness of bananas grown in Uttar Pradesh.

how much is the production

The Additional Chief Secretary, Agriculture and Marketing, appreciated the efforts of APEDA for working towards making Uttar Pradesh a hub for agricultural exports. Also requested to organize training programs for farmers mutually with the Uttar Pradesh government. During the address, he highlighted the agriculture export policy developed by the government.

Also read: In Haryana, farmers forced to sell millet at half the price of MSP, the government is unable to provide even the cost

The aunt made a tremendous dance on the standing cot, the user said – I wish the aunt’s balance should not be disturbed