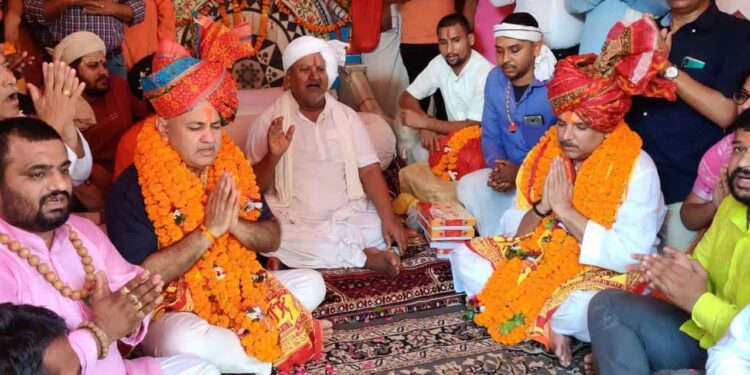 Delhi Deputy Chief Minister Sisodia and AAP’s Uttar Pradesh affairs in-charge Singh offered prayers amid chants. He also took a holy bath in the Saryu river and had food with the sadhus.

Aam Aadmi Party (AAP) leaders Manish Sisodia and Sanjay Singh launched the party’s campaign for the 2022 assembly elections in Uttar Pradesh after offering prayers at the Ayodhya Ram Janmabhoomi and Hanumangarhi temples. The two leaders will also lead the Aam Aadmi Party’s tricolor yatra in Faizabad on Tuesday starting from the tomb of 18th century Nawab Shuja-ud-Daula and ending at the city’s Gandhi Park.

Delhi Deputy Chief Minister Sisodia and AAP’s Uttar Pradesh affairs in-charge Singh offered prayers amid chants. He also took a holy bath in the Saryu river and had food with the sadhus. Sisodia said, “I prayed to Lord Ram for the establishment of Ram Rajya in Uttar Pradesh.”

Sisodia said he prayed to Lord Hanuman at Hanumangarhi temple to bless AAP for government formation in Uttar Pradesh so that the people of the state get good education, quality health services, electricity, water and employment “like Delhi”. Could. On this occasion, both the leaders also recited ‘Hanuman Chalisa’ at Hanumangarhi temple.

AAP leaders also met saints who invited them to the ‘Bada Sthan’ temple. Sisodia and Singh also had a meal with the sadhus of Ayodhya.

AAP will contest on 403 seats

Along with other parties, the Aam Aadmi Party has also tightened its gear for the Uttar Pradesh Assembly elections. On Sunday, Aam Aadmi Party leader Sanjay Singh made a statement that AAP will fight on 403 assembly seats. During this he said, “You should not be underestimated. The party has performed well in the panchayat elections. Sanjay Singh said, we took out 83 seats where Congress won 40 seats. He further said that the party is not forging an alliance with any party.

Also read- Secret of Pakistani woman’s murder exposed, she was murdered in an attempt to implicate her in double murder

Also read- Attention! 699 buildings can turn into rubble anytime in North Delhi, know how many dilapidated buildings are in your zone