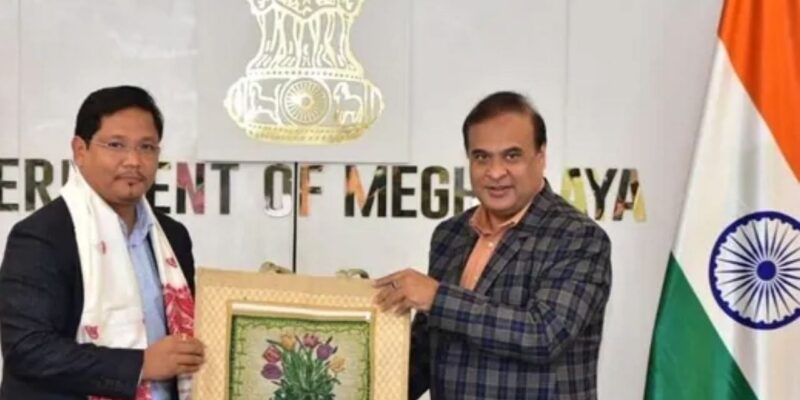 The officials of Assam and Meghalaya will hold a meeting on Saturday regarding the border dispute between the two states. The meeting will be held in Silchar, Assam. Earlier on October 5, both the northeastern states conducted a joint inspection of the inter-state border areas for the first time to resolve the long-pending border dispute. Meghalaya minister Reniktan Lyngdoh Tongkhar and Assam minister Atul Bora headed the cabinet-level committees of their respective states on Monday, an official said.

The purpose of this tour was to see the ground reality. Meghalaya minister Reniktan Lyngdoh Tongkhar said, “While no decision will be taken on the basis of this visit, the committees will give their feedback to the respective chief ministers.” He expressed hope that both the states will resolve the dispute soon. The chief ministers of both the states, Himanta Biswa Sarma and Kongrad Sangma met on 23 July and 6 August to discuss border issues. Three days after that first meeting, there was a gunfight between the Assam Police and their Mizoram counterparts, resulting in several casualties.

Disputes between the two states over 12 areas

There is a dispute between the two neighboring states over 12 areas. There are minor differences on six of these areas and the states have to decide on resolving them on a priority basis. The governments of both the states have decided to focus on these half a dozen areas in the first phase of discussion. These six regions are Tarabari, Gijang, Falia, Baklapara, Pillingkata and Khanapara. According to Assam, Cachar, Kamprap Metro and Kamrup Rural come under its area. However, Meghalaya maintains that West Khasi Hills, Ri Bhoi and East Jaintia Hills are within its territory.

In the past, the cabinet visited Hahim, Ardong in Meghalaya’s West Khasi Hills district, besides Salbury, Malchhapra, Gamerimura, Gohanimara and Gijang areas. He also visited Jirang in Meghalaya and Palashbari in Assam. A senior district official said that Athiyabadi could not be visited as the roads leading to the village were covered with heavy stones and betel nut trees. The committees spoke to the local people and members of organizations like All Rabha Students’ Union, Garo Students’ Union, Rabha Women’s Council and Garo Women’s Council.

3 feet and 4 inches tall man made world record in body building, people said that he will not be able to do anything in life

Taiwan will be ‘unification’ with China! Xi Jinping said – ‘will make a part of our country in a peaceful way’