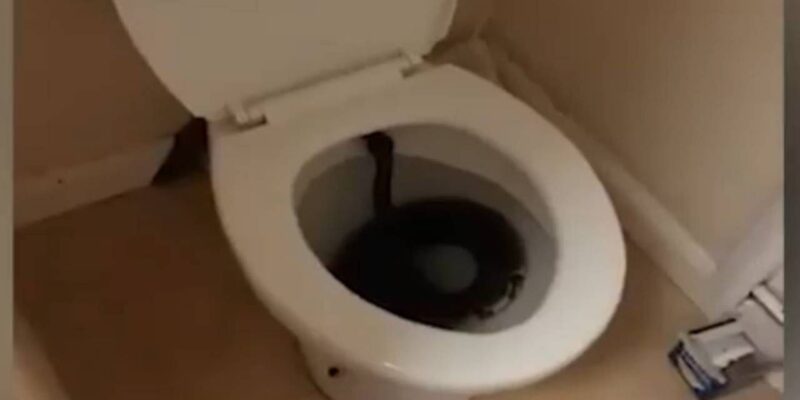 A woman in the town of Sturbridge panicked when she went to her bathroom.

On hearing the name of snake or python, many people get scared badly. Now think that in such a situation, what would happen if someone really got hit by a snake. It is obvious that anyone’s senses will be blown away. One such case has come to light recently from England where this incident happened with a woman. In fact, the woman went inside by opening the bathroom door and as soon as she stepped towards the toilet seat, she saw a python sitting on the seat. On seeing the python, the woman cried terribly in fear.

According to a report, this incident is from Midland, England. Where a woman in the town of Sturbridge panicked when she went to her bathroom. In fact, the woman was about to sit on the toilet seat when she saw that a python had already taken possession of her. As soon as the woman saw him, she withdrew in fear and started crying. The woman immediately got out of there and immediately closed the door. After this he called his friend for help. As soon as he told his friend that the python was sitting there, he too got scared.

After this the woman also called other people and the work of getting her out started. The woman immediately called the rescue department and informed about it. Regarding this incident, the woman told that she got up at 5.30 in the morning to go to the toilet, shortly after that she went inside the bathroom and saw that there was a python. His senses were blown as soon as he saw it. So she was terribly scared. That’s why he thought it best to get out of the bathroom without delay.

The woman also said that as soon as I saw the python, I closed the toilet door the very next moment. After which I thought, have I really seen it. So when I looked through the door again, I saw that this python was sitting there. At present, the python has been taken out of there. But after hearing this news, people got scared badly. Now this news is making headlines all over the world.

Also read: OMG! This woman breaks down as soon as she sees a sponge in the house, she has a strange disease since the age of 14

Also read: This woman has not eaten any vegetable since childhood, there is panic on seeing it; Know what is the reason

Maharashtra: Home Minister Patil’s clarification in the case of espionage of Sameer Wankhede – no such order was given