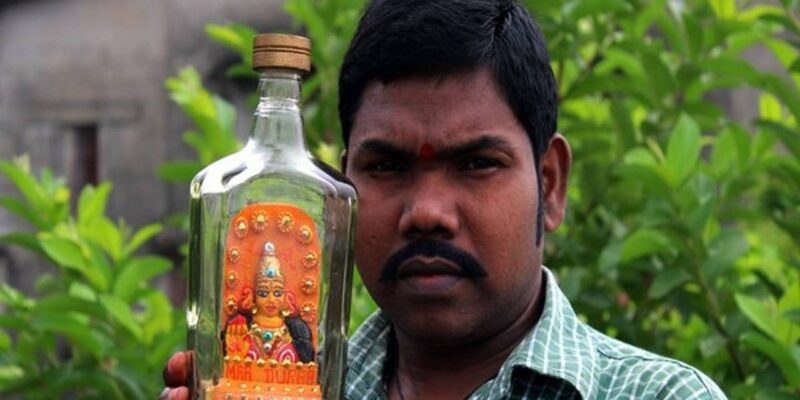 Artist from Odisha made eco-friendly idol of Goddess Durga inside a bottle.

A miniature artist from Bhubaneswar in Odisha has created an eco-friendly idol of Goddess Durga inside a bottle and has sought blessings to free people from the COVID-19 pandemic. The name of this artist is L Easwar Rao, who hails from Jatni village in Khurda district of Odisha. He has chosen a unique way of wishing people a Happy Navratri with his creativity.

The idol is made from small pieces of clay and framed on glass plates inside the bottle. I have painted the idol and used decorative items to decorate the idol of Maa Durga. He further said that on Navratri, I have sought the blessings of Goddess Durga to free people from the COVID-19 pandemic, and also appeal to the people to follow all the rules of prevention from Corona to defeat this epidemic.

Let us inform that, this time the Odisha government had also ordered to make the artists eco-friendly for Durga Puja. The Odisha government had prepared a special rule on the making of sculptures by artists in view of the control of environment and water pollution. The state government has banned idols made from plastic, thermocol, plaster of paris, synthetic dye-based paints and non-biodegradable chemical colors on a large scale in cities during festivals.

Thermocol plate has also been banned

Along with this, orders have also been ordered to ban the thermocol plate used during the distribution of prasad after worship. An order has been given to take action against the black artists for ignoring the new rules during the construction of idols. The festival of Sharad (Autumn) Navratri involves worshiping nine forms of Goddess Durga. Shardiya Navratri starts from the first date of Shukla Paksha of Ashwin month, in which divine forms of Maa Durga are worshiped for nine days.

A huge amount was spent in gambling, then aeronautical engineer became the master mind of the robbery, along with friends, robbed the jewelry shop