Alert! Government warns by sending SMS, do not take these calls even after forgetting, immediately complain here

People are being made a victim of fraud in the name of these fake international calls.

The telecom department has asked users across the country to be alert to fake international calls. This government telecom department has sent a message to crores of users across the country last week and asked them to be careful about this. In this message sent by the Telecom Department, it was written, ‘If you see an Indian number on the screen while receiving an international call or if you do not see any number at all, then please inform us about it.’ A toll free number has also been issued by the department. This number is 1800 110 420/1963.

Actually, there is a chance on such a number that it is a fraud call. In such a situation, the users are being told that if they too get a call from any such number, then they should inform the telecom department about it.

However, it is not yet clear why this information is being sent by the telecom department at this time. However, international call fraud has grown rapidly in the last few years. Many people have complained that they have been duped by calling from an unknown number. These calls are a kind of scam, which everyone should avoid. 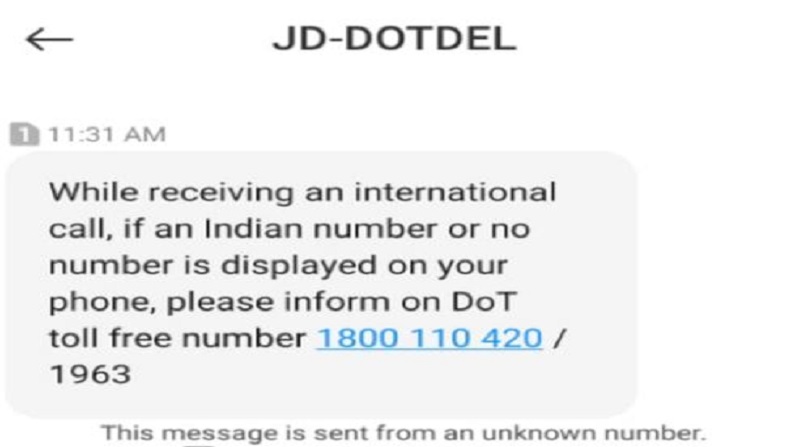 Message sent to the people from the telecom department.

Many telecom operators have also asked their subscribers to be cautious of such international calls. For example, there is a separate section on the website of Bharti Airtel, where it is written, ‘We are issuing General Advisory to alert Indian Telecom customers. Many users are made a victim of fraud in the name of a prize / lottery.

How do these international fraud calls work?

In general, on any international call, the country has a code next to the number. But, on receiving such fake call, it is said that you have won a prize / lottery. In this way, the persons of the thugs sitting on the other side know the information and sometimes they charge some amount as a commission from the people. Many times, it is not a call, but through SMS, people make a means of cheating.

To avoid similar fraud, the telecom department and the telecom companies ask people to be vigilant. You should not respond to such calls, messages or missed calls.

Also read: Russia is preparing Corona vaccine for many animals including dogs and cats, know how it will work