Agra: Paras Hospital, which conducts mock drill of oxygen supply, will be sealed, after the video went viral, the administration took action 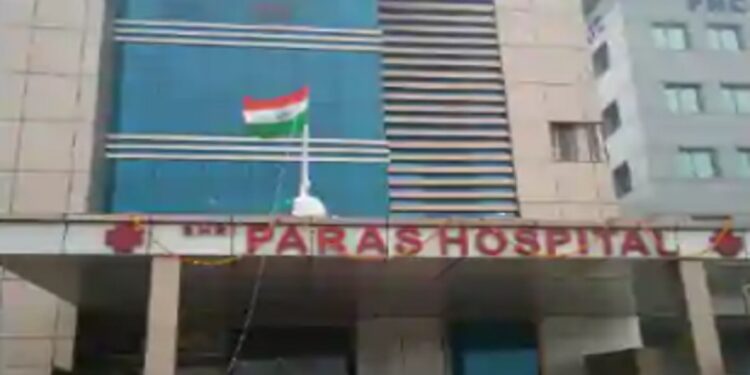 The administration has taken action after a video clip of a mock drill purportedly cutting off the oxygen supply of corona patients in Agra went viral. In this case, the District Magistrate has given instructions to seal Shri Paras Hospital on Tuesday. With this, instructions have been given to file a case against the hospital operator.

District Magistrate Prabhu N Singh has rubbished the news of the death of 22 people due to lack of oxygen. The video of Dr. Arinjay Jain, the owner of the hospital, went viral recently. In this, Jain can be heard talking about conducting a mock drill to shut off oxygen for COVID patients for five minutes.

After the video went viral, District Magistrate Prabhu N Singh and Senior Superintendent of Police Muniraj reached Shri Paras Hospital on Tuesday. District Magistrate Singh has given instructions to seal the hospital as well as register a case against the operator. The Chief Medical Officer has been directed to shift 55 admitted patients in the hospital to other hospitals.

The news of the death of 22 people baseless

There was enough oxygen for the admitted patients

Singh said that the above cylinders were sufficient for the patients admitted there. The district magistrate said that the alleged five-minute mock-drill of oxygen supply and saying that the plant at Modi Nagar has run out of oxygen created confusion. Considering this matter a violation of the Epidemic Act, legal action is being taken.

The admitted patients will be shifted to another hospital

Officials said that a case has been registered in the police station New Agra for the investigation of the said incident. Sealing the Shri Paras Hospital with immediate effect, the Chief Medical Officer, Agra has been directed to properly shift the 55 patients admitted here for treatment to different hospitals.

I am ready for it…

UP: ‘We will also get vaccine’, Akhilesh Yadav said – was against BJP’s vaccine but welcomed the Indian government’s vaccine