‘Adharma Sansad’: People like Narasimhanand propagate adharma in the name of religion 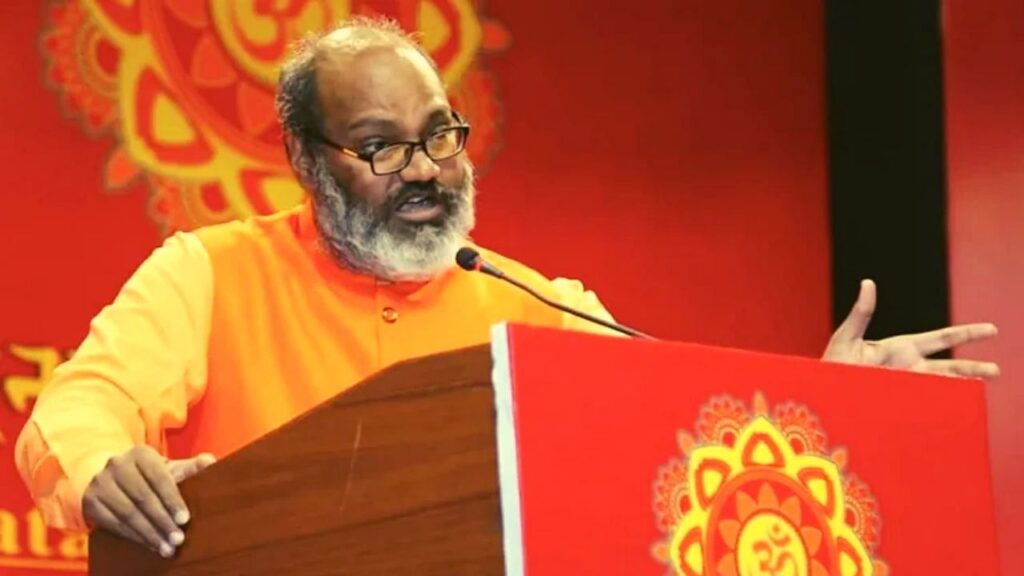 Narsinghanand has been continuously working to mislead Hindus and spread hatred. He has been giving such speeches often in Dasna, a Muslim-dominated area of ​​Uttar Pradesh. There are many FIRs registered against him for his hate speeches.

Uttarakhand Police has registered an FIR against Yati Narsinghanand Saraswati, the head priest of Dasna Devi temple, for his statement in which he had allegedly called upon Hindus that in 2029 some Muslim would be the prime minister of the country. He should be killed so that he does not become a Prime Minister. In the FIR, the names of many more people including Jitendra Tyagi alias Waseem Rizvi, the newest disciple of Narasimhanand, who converted from Muslim to Hindu. According to media reports, in the video during the Parliament of Religions, Narasimhanand incites Hindus to take up arms and go to war against Muslims.

According to media reports, Yeti Narasimhanand urged to stop a Muslim from becoming the Prime Minister of India in 2029 and kill Muslims if needed to protect Hindu religion. Narasimhanand made these remarks during a three-day meeting of religious leaders of the Hindu community in the holy city of Haridwar in Uttarakhand. The Dharma Sansad meeting was organized from 17 to 19 December at Ved Niketan Dham. Around 150 religious leaders from the states going to the polls early next year attended the meeting. Former Delhi BJP spokesperson Ashwini Upadhyay was also present in the Parliament of Religions.

However, despite several riotous FIRs against him, Yeti Narasimhanand Saraswati remains out of the police custody due to his political clout. According to the local police, the chief priest of Dasna Devi temple in Ghaziabad has always been in controversies.

Born and brought up in Meerut, the real name of Narasimhanand is Deepak Tyagi. He studied at Chaudhary Tarachand Inter College, Hapur and went to Moscow in 1989 for a degree in Chemical Technology and worked there till 1997. After returning to India, he retired in 1998 and changed his name to Deependra Narayan Singh. Later he became Yeti Narasimhanand Saraswati. In 2007, he became the chief priest of the Dasna Devi temple. He is also the Mahamandaleshwar of Juna Akhara.

Narasimhananda has a history of hate speeches

Narasimhanand has been continuously working to mislead Hindus and spread hatred. He has been giving such speeches often in Dasna, a Muslim-dominated area of ​​Uttar Pradesh. There are many FIRs registered against him for his hate speeches. At the beginning of the year, the Ghaziabad Police started action against Narsimhanand under the Goondas Act. According to the police, action was initiated against them due to anti-social activities, scuffles, attempt to murder and other activities. For indecent remarks against women BJP leaders, on 31 August 2021, the Ghaziabad Police registered three FIRs against them. The National Commission for Women also objected to these comments.

In October 2021, Mahant Yeti Narasimhanand accused a 10-year-old Muslim boy of spying on him. He also said that there are many trained killers of this age among Muslims. Despite several FIRs, the Mahant of Dasna stays away from police custody due to his political clout.

Religious leaders have been silent on these issues for a long time. But now the time has come to raise voice against Yeti Narasimhanand Saraswati and his ilk. The organizers named it ‘Dharma Sansad’. Before jumping to the conclusion, it is necessary to know what is the religion on which the Parliament was organized. It needs to be clear what they see as a threat and why it needs to be protected.

Although it is difficult to understand religion, it is so difficult that some people get frustrated and take up the sword instead of the dictionary. If you’re looking for good arguments to quell your fanciful rancor and want to engage in a campaign to boost your ego, this action truly makes sense. This is what motivates self-styled defenders of religion like Yeti Narasimhananda (against whom several police cases are pending in Uttar Pradesh) to remain ignorant of the true definition of religion. If they know the correct definition of religion, then they will not do such a thing.

On the other hand, those who are concerned about the religion itself soon realize why the Mahabharata is one of the two major epics for the people of this country. At the core of this great book is the dilemma of understanding religion. It is so subtle that it is difficult to understand.

And what does it mean? In the Amarakosha of Sanskrit, religion has been explained with synonyms like ‘virtue’, ‘moral merit’ and ‘duty’. Renowned dictionary lexicographer Monier Monier-Villeans gives 905 different meanings for the word. Translator Glen Wallis says the word has innumerable meanings in many languages. He found that the group of words equivalent to religion in English are morality, righteousness, law, foundation, custom, education and truth.

When Yeti Narasimhanand talks of war against Muslims, opposite meanings of such words must have come to mind. It should be noted that none of the 900 synonyms for religion mean ‘religion’. This is because our ancestors made virtue or moral merit a way of living their lives. They didn’t label it ‘religion’ until people with other lifestyles asked them, what is your religion? Then the label ‘Hinduism’ was created, which is a set of guidelines for living only according to virtue and moral merit.

‘The whole world is pervaded by Ish, that is, God’

So what is this Hinduism with its virtuous life and vision on the holy world? It is not appropriate for Godse’s fans to refer to Gandhi, but since many consider Mahatma Gandhi to be a Hindu who should be emulated, his views matter.

Gandhiji had said that even if the whole of Hinduism is destroyed in a calamity – just as Yeti Narasimhananda thinks that Hinduism is under threat – it can be revived, provided that the Ishavasya Upanishad The first verse should be left. What does it say? In simple words, the whole world is pervaded by Ish, that is, God and one should enjoy leaving this world. There are many ways to enjoy it while sacrificing it but killing your neighbors is not one of them.

‘Mercy is the root of religion’

Sanskrit scholar Kshiti Mohan Sen gave a small introduction to Hinduism. It was published a year after his death in 1960 and received the status of a classic. The current version also features a preface to his grandson. Filling in the name of Kshiti Mohan Sen gives another reason to the self-styled defenders of Hinduism to be willfully ignorant of the true definition of religion.

But the point is that, according to a summary of a review of Sen’s research, Hinduism remains very tolerant, despite its current political revival. It is a universal religion which is capable of adopting the things of other religions as part of its religion.

But not everyone can be expected to read that much. To make matters easier here, the saint-poet Tulsidas may be mentioned: “Compassion is the root of religion.” The basic theme of the three-day event in Haridwar is Mercy, Compassion and Sympathy. It should be very clear that religion was for Parliament and everything, but not for them. It was indeed a lawless parliament. They are doing the exact opposite of what they are organizing. To put it in bitter words, their actions are like they are talking about joining the Pakistani army to save India.

Hindus are considered tolerant but their religion is in danger and they should do something for people like Narasimhanand. Institutions like the state and police are secular. The protection of Dharma from them should not be neglected. Now is the time when religious leaders come forward and raise their voice against the strange misrepresentation of faith for such nefarious purposes.

Harbhajan, who has said goodbye to cricket, will enter politics? Said – offers have been received from many parties