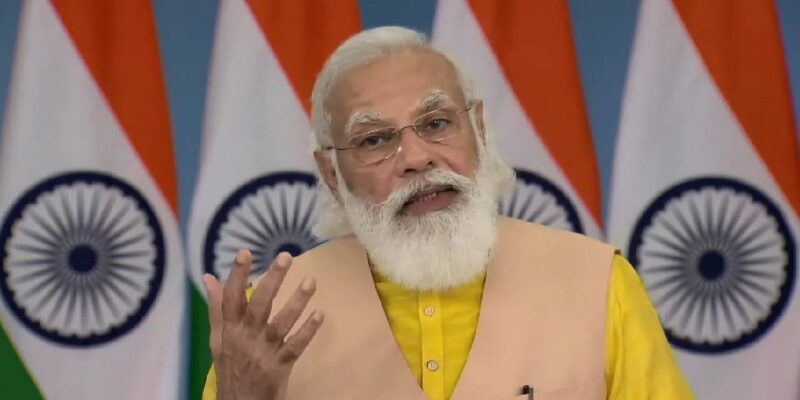 Narendra Modi had made a place in the hearts of the people of Gujarat during his reign of 18 months.

Narendra Modi was given power for only 18 months after the earthquake in Gujarat for the first time. But during this time his work was completely successful in making a place in the hearts of the people. Bhuj city was most affected by the severe earthquake in January 2001 and the commendable work done for disaster management and rehabilitation with the efforts of Narendra Modi has become unforgettable.

Handing over the throne to Narendra Modi by running the government for 42 months by a veteran leader like Keshubhai was no less than a big challenge. The declining popularity of BJP had become a problem for the party. Due to the commendable efforts made by Modi in the city of Bhuj, which was scattered due to the severe earthquake, a special place was started for Modi in the hearts of the people. Narendra Modi knew that he had only 18 months, so he left no stone unturned to convert disaster into opportunity. During a year and a half, Modi performed the responsibility of healing the people of Gujarat suffering from famine and earthquake very well.

But Modi was faced with terrible challenges in the early days itself. In February 2002, Gujarat became a witness to the terrible riots, from which it was very difficult for the then CM Narendra Damodar Das Modi to get out of the splinter. The opposition was very aggressive. At the same time, the veterans of Gujarat BJP did not want to miss the opportunity to shake Modi’s chair. But by winning the election in December 2002, Modi gave a befitting reply to everyone inside and outside the party. Modi, who has become the poster boy of Hindutva across the country, was discussed from house to house and Modi had succeeded in saving the reputation of the party which was falling in the state. By winning the elections in Gujarat, Modi laid emphasis on development, which proved to be effective in taking his stature to greater heights as compared to other leaders of the state.

Narendra Modi became the CM for the first time for 18 months. In front of Modi, veteran BJP leaders like Keshubhai Patel and Vallabh Kathiria in Saurashtra, Kashiram Rana in South Gujarat were presenting a serious challenge. Keshubhai Patel, Sureshbhai Mehta and then Gujarat BJP president Rajendra Singh Rana were among those who threatened to revolt in the party when Modi was sworn in as Chief Minister for the first time on 7 October 2001. were ready to challenge.

In this difficult time, Modi showed his political acumen very well. Through his speeches, Modi, while trying to reach the veteran leaders, said that he is a lucky Arjun who has got two Krishnas (Keshubhai-Sureshbhai). The order to cooperate with Modi was from the central leaders of BJP. Whereas Vallabhbhai Kathiria, Surat’s veteran leader Kashiram Rana and all the chief ministerial candidates were very angry with Modi being made CM. Vajubhai Vala, the then Finance Minister of Saurashtra, did not hesitate to vacate the Rajkot seat for Modi and Narendra Modi had won the first success in winning the trust of the people by winning from there with more votes than expected.

In fact, after the earthquake, discontent against the then Chief Minister of Gujarat Keshubhai Patel had started burning strongly. Then Narendra Modi was made CM in Gujarat in place of Keshubhai Patel. By the way, after the rebellion in the BJP in 1996, the chances of Modi returning to Gujarat were negligible. But the return of Narendra Modi to power only after five years was a surprise to everyone. Narendra Modi was sent from Delhi and many veteran leaders of the country attended his oath ceremony. Many leaders including the then Defense Minister George Fernandes, Home Minister LK Advani, the then Chief Minister of Uttar Pradesh Rajnath Singh were present among those who attended the oath ceremony and among 50 thousand workers, the then Governor of Gujarat Sundar Singh Bhandari administered the oath to Modi. Rather, a new chapter was added to the politics of the country.

In the year 2002, the death of 58 people in the Godhra incident and then the loss of 1200 lives in the violence that followed was like an odd situation for the Modi government. As the CM of Gujarat, Modi was left with the only option left to seek their support by going to the people’s court amid allegations of not preventing and abetting the riots. Modi emerged victorious in the public’s court and managed to win 127 seats out of 182 for the BJP, which was a new life for the party and for them. Modi was touching the peak of popularity in the state. At the same time, his body was not spared from the controversies. The opposition had gone to the court to convict him in the Gujarat riots. But Modi was carelessly engaged in fulfilling the needs of Gujarat.

In fact, whatever responsibility Modi has been on, he has done his job well. Narendra Modi was made the general secretary of the party while Keshubhai Patel was the CM. Narendra Modi was given the charge of five big states by making him the general secretary. Before becoming the CM, Narendra Modi had made his place in the hearts of central leaders after seeing the party’s successful workload in sensitive states like North-East and Jammu and Kashmir. His ability to organize and connect with the local people was recognized by the big leaders of the party. Therefore, to save the declining credibility of BJP in a state like Gujarat, the party handed over power to him. By playing it well, he continued to win the elections for the BJP.

Modi has been an advocate of public development

When Narendra Modi was handed over the power of Gujarat, the condition of Gujarat was not good in both economic and social field. During the first term of Narendra Modi, an increase of up to 10 percent was recorded in the GDP, which is an example in itself. Narendra Modi also implemented many schemes, including the Panchamrut scheme, including a scheme called Sujalam Sufalam. With the help of Sujalam Sufalam Yojana, there was a lot of help in water conservation, which was the need of Gujarat. Not only this, to reach all the dimensions of development, Modi took the help of Krishi Mahotsav, Beti Bachao Yojana, Jyotigram Yojana, Karmayogi Abhiyan, Chiranjeevi Yojana, which continued to take him to the pinnacle of success. The award of merit letter to Modi by the United Nations for the successful efforts of relief work and disaster management in the earthquake in Gujarat was a big achievement for Modi. It was evident from this that Narendra Modi is not one to look back on the issue of public concern.

After all, which special person’s name has Jhanvi Kapoor got a tattoo done? Know here….

Himalaya increased the ‘trouble’ of the Chinese army, the soldier troubled by stomach and heart related diseases, the death of the top commander