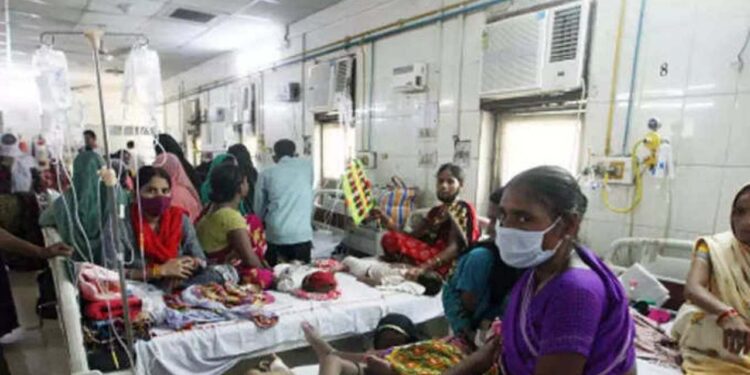 The laborer told that he made a lot of pleas to start the treatment of the child from the private hospital, but due to lack of money, his son was not admitted.

Dengue continues to wreak havoc in UP’s Firozabad. About 12 thousand patients are getting their treatment in Firozabad. The Health Department has given this information.

Dengue in Firozabad, UPFirozabad Dengue) and the havoc of viral fever continues. About 12 thousand patients are getting their treatment in Firozabad. The Health Department has given this information. According to the Health Department, the entire district is in the grip of disease these days. Four more patients lost their lives in the last 24 hours. By Sunday, the death toll from dengue reached 114, including 88 children.

Last week, the NCDC team exposed the outbreak of dengue in Firozabad district. The deaths due to the disease are not taking the name of stopping. At the same time, the administration is getting the medicine sprayed to curb the disease. Door to door surveys are being done. The Health Department says that these days about 12 thousand patients are battling dengue and viral in homes and hospitals in Firozabad district.

Patients upset due to non-availability of beds in the hospital

Even on Sunday, patients were seen struggling to get beds in government hospitals. In fact, the cost of treatment in private hospitals is very high. Not everyone is able to get treatment in a private hospital. At the same time, government hospitals are completely full of patients these days. On Sunday, a laborer named Veerpal lost his 5-year-old son due to non-availability of treatment. The victim told that the private hospital had demanded 30 thousand rupees in advance to admit her son. But due to lack of money, he could not get her admitted to the hospital.

The hospital did not admit the sick child

The laborer told that he made many requests to start the treatment of the child from the private hospital but his son was not admitted. Eventually he took her to Firozabad Medical College. But even there the staff did not recruit him. The child died battling high fever. On the other hand, CMO of Medical College Dr Hansraj says that no official complaint has been lodged in this regard. He said that he is constantly arranging beds in the hospital for a large number of patients.

Most of the victims of viral and dengue are children under the age of 15 years. Screams are heard everywhere in the hospital. At the same time, many people are seen upset due to non-availability of beds.

Also read- Dengue-viral havoc continues in UP, 13 deaths in Firozabad in 24 hours, 6 patients also succumbed in Kasganj, patients troubled for beds in hospital