Ghevar Mithai: You can enjoy Ghevar in many flavors in the month of Sawan 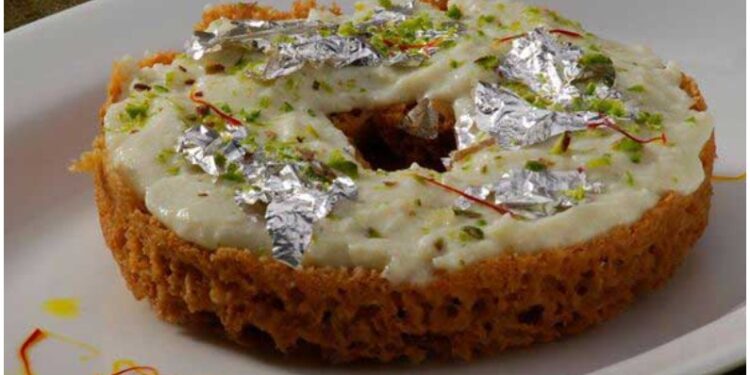 Ghevar Mithai: Ghevar is a traditional Rajasthani sweet. This sweet is liked in the month of Sawan, especially on the occasion of Rakshabandhan and Teej. Ghevar is prepared in many different ways.

Neroli Oil: What is neroli oil and how is it beneficial for the skin

Healthy Snacks: If children do not eat green vegetables, then try these tasty snacks, will demand again and again

Ghevar is a delicious dessert. This Indian sweet is very much liked on festivals like Teej and Raksha Bandhan. It is prepared from maida and milk. It is first fried in ghee, then dipped in sugar syrup and finally it is decorated with different toppings. Ghevar is a traditional Rajasthani sweet which is very popular in North and West India. This dessert is shaped like a donut. It is made in different ways.

Give me a break Malai Ghevar is one of the most popular Ghevar variants after plain Ghevar. A layer of cream is poured over the ghevar. Its texture is soft and half crisp. Many people also mix khoya with cream. After this, add it to the Ghevar so that it tastes even better. Cardamom powder and saffron are two important ingredients added to Ghevar. Both of these give it a unique taste and aroma.

Dry Fruit Ghevar – Another delicious Ghevar flavor which is liked all over India is dry fruits Ghevar. Many types of dry fruits are used in this such as almonds, cashews, pistachios and raisins etc. This is the reason why it is one of the most expensive Ghevar. It is very tasty which is liked by most of the people.

Chocolate Ghevar – Chocolate is liked by most of the people. But do you know that a delicious Ghevar is also made from chocolate. While making this Ghevar, cocoa powder is added to it, which gives it a brown color. It also gives the taste of chocolate. You can garnish it with chocolate sauce. Enjoy a traditional sweet with this delicious twist.

Bihari Ghevar There is another type of Ghevar that is Bihari Ghevar. This Ghevar looks like a mixture of Jalebi and Ghevar. It looks like a big jalebi. It is prepared from maida, ghee, curd and food colour. It is then fried in ghee, dipped in sugar syrup and garnished with rose petals, saffron and dry fruits.

Rabri Ghevar – Rabri itself is an Indian sweet. Its texture is like kheer but it is thick. Rabri is a condensed milk based dish prepared by boiling milk until it reduces in volume and becomes thick. It is then mixed with jaggery, saffron and some other ingredients. The color of rabdi is white. Rabri is also used to decorate Ghevar. Whose taste is amazing.

Also Read – Monsoon Recipes: Try This Recipe Of Dal In The Rainy Season