OMG! You will get a chance to spend the night ‘with the tigers’, this special hotel is opening from February 1! 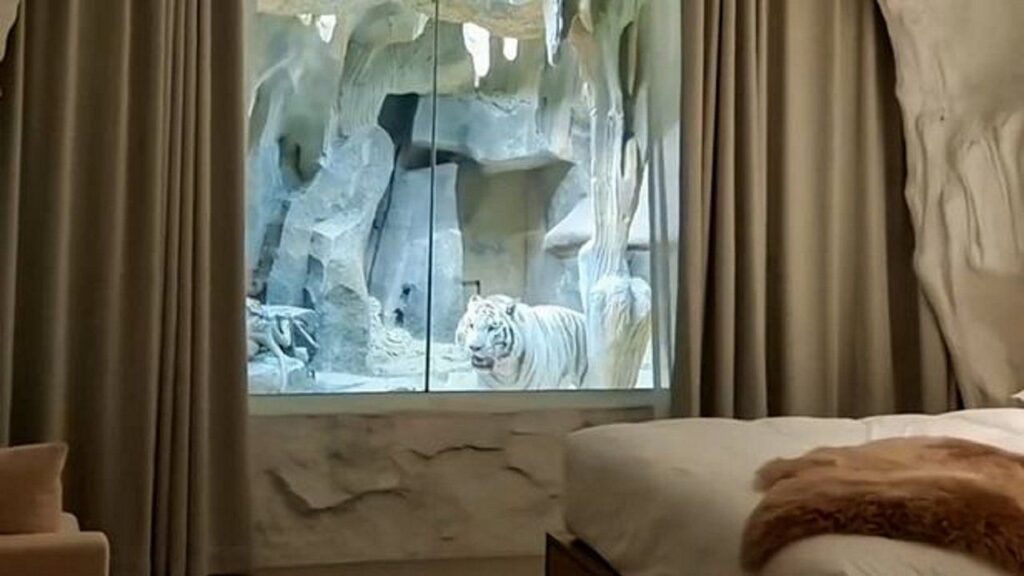 A special room has been built in the Sandy Tribe Tree-House Hotel, where tigers will be seen roaming all night next to the beds of the occupants, not fake but real tigers.

You will get a chance to spend the night ‘with the tigers’ (Photo: ViralPress)

Lions and tigers are among the most dangerous animals in the world, from which it is better if humans do not get fed alone, otherwise these predatory animals eat anyone by tearing them. Even big animals are not able to escape from their attack, so how can a human being compete with them, you can imagine. However, such arrangements have also been made for the adventure enthusiasts so that they can see the tigers very close by. You must have seen many such videos or pictures on social media, in which humans are imprisoned in cages, while tigers are roaming outside. A hotel in China is also offering a similar opportunity, in which people will get a chance to spend the night ‘with the tigers’.

Actually, China’s Jiangsu Province (Jiangsu provinceTo promote tribal tourism in Nantong City, a hotel has been built, called the Sandi Tribe Tree-House Hotel (Sendi Tribe Treehouse Hotel) is known as. A special room has been built here, where tigers will be seen roaming all night next to the beds of the people staying, not fake but real tigers.

According to Mirror’s report, that particular room of the hotel is adjacent to the cave of white tigers. However, the hotel staff says that there is no need to worry about staying in this room, as it is completely designed keeping in mind the safety. There is a transparent wall in the room, but it is made of bulletproof glass, which has the power to withstand even a blast. In such a situation, even if the tiger wants to break the glass, then they cannot break it, that is, the people living here will be absolutely safe.

However, so far this special room of the hotel has not been opened for tourists. It is being considered to open it on February 1, because the ‘Year of Tigers’ is starting from this day in China. According to media reports, the experience of staying in this special room will be very special, because usually it does not happen.

read this also: OMG! A fierce fight took place between a wild boar and a tigress, see who beat whom in the video

read this also: Hearing strange voices, a person screamed, a dangerous spider came out from under the bed

Akbar made the capital of the Mughal Empire, why did he leave that city?