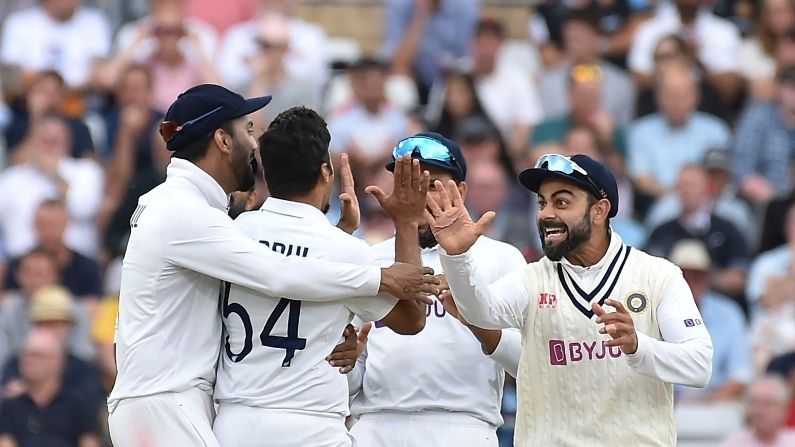 IND vs ENG ist Test Day 1: The fast bowlers of the Indian team bowled brilliantly and bundled out England for a small score of 183 runs in the first innings.

India’s fast bowlers bowled well on the first day of the first Test against England.

Jasprit Bumrah regained his lost momentum while Mohammed Shami showed his bowling brilliance as India beat England for 183 in their first innings on the first day of the first Test match. India then batted cautiously and scored 21 runs for no loss till the end of the first day’s play. Openers Rohit Sharma (nine not out off 40 balls) and KL Rahul (nine not out off 39 balls) batted smoothly for 13 overs to not let the team get a shock. Elected to bat after winning the toss, England were once looking in a good position at 138 for three but after that they lost their last seven wickets within 45 runs. For him, captain Joe Root scored 64 runs off 108 balls, which included 11 fours.

Bumrah, who was ineffective in the World Test Championship final, showed his momentum and took four wickets for 46 runs. Three other fast bowlers of the team Shami (3 for 28), Shardul Thakur (2 for 41) and Mohammad Siraj (1 for 48) supported him well. Rohit and Rahul were very careful and did not take any kind of risk. In the last over of the day, Olly Robinson made a credible appeal for a leg before against Rahul. England also lost the review on this.

England lost two wickets each in the first two sessions but in the third session their innings fell apart like a pack of cards. Sam Curran meanwhile added an unbeaten 27 runs but the other batsmen had no answer from the Indian bowlers. England scored 61 for two till lunch and meanwhile lost the wickets of openers Rory Burns (nil) and Jack Crawley (27 off 68 balls). In the second session, Dom Sibley (18 runs off 70 balls) and Jonny Bairstow (29 off 71 balls) returned to the pavilion. Root and Bairstow shared a 72-run partnership for the fourth wicket.

Bumrah got his first success

The Indian bowlers took full advantage of the cloud cover and getting swing. Bumrah gave India a golden start. He dismissed Burns leg before on the fifth ball itself. After three outswingers, Bumrah pitched the ball to the leg-stump which hit Burns’ pad and the umpire’s finger was raised on appeal. The batsman took DRS but to no avail. Siraj got India the second wicket. His ball reached wicketkeeper Rishabh Pant’s gloves with a lighter edge of Crawley’s bat but the umpire turned down the appeal. On Pant’s advice, Kohli took a review which became clear that the ball had taken the edge of the bat. India had lost a review earlier in this over.

Shami’s bowling had amazing sharpness. He fielded Rahul at midwicket in the second session and then tempted Sibley to flick. The batsmen got caught in their net and Rahul took an easy catch. There was no control in Sibley’s shot. The Indians bowled tight but Root used it whenever he got the chance to score runs. He showed patience and waited for the loose balls. In the meantime, he made some visible shots and completed his 50th Test half-century. The story changed abruptly in the third season. It started with the wicket of Bairstow just before the tea break, who was dismissed leg before by Shami. India’s decision of DRS was right then. Shami, completing his over in the third session, got Dan Lawrence (zero) caught by Pant on the last ball.

Shardul got a place in Team India

Jos Buttler remained at the crease for 18 balls but he was seen struggling to hit the shot in the meantime. In such a situation, the ball taking Bumrah’s angle kissed his bat and got caught in Pant’s gloves. Butler didn’t even open the account. Shardul gave great success to the team by getting Root out leg before full length ball. He dismissed new batsman Ally Robinson in the same over, who made Shami practice the catch. Bumrah sent Stuart Broad (four) and James Anderson (one) to the pavilion. India kept Shardul in the playing XI as the fourth fast bowler to strengthen their batting, while Siraj’s form saw him in the team. Ravindra Jadeja is the only spinner in the team.