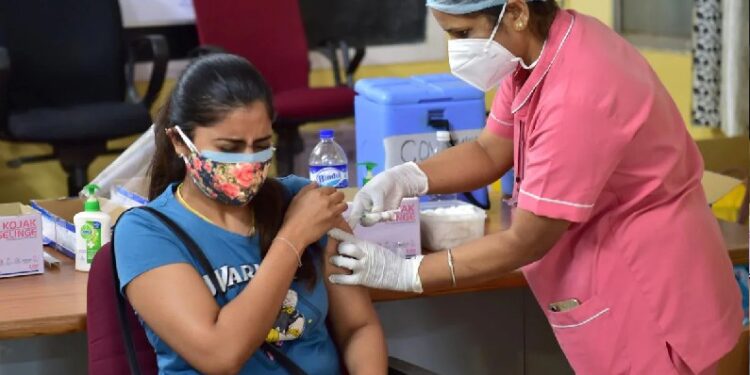 In Andhra Pradesh, Assam, Chhattisgarh, Delhi, Haryana, Jharkhand, Kerala, Telangana, Himachal Pradesh, Odisha, Punjab, Uttarakhand and West Bengal, more than 10 lakh beneficiaries in the age group of 18-44 have been given the first dose of corona.

Video: Has your back pain also spread through the waist, hip and thigh to the whole leg, be careful! you are in the grip of this disease

Weight Loss: Eat these five things in breakfast to lose weight, it is very beneficial for health

So far 38.50 doses of corona vaccine have been given in the country.

The pace of the second wave of corona across the country has slowed down considerably and there is also a significant decline in the cases of infection. However, due to the possibilities of the third wave, there is a lot of emphasis on corona vaccination in the country and lakhs of people are being vaccinated every day. It is the effort of the government that the entire population should be vaccinated as soon as possible, so that the damage caused by corona can be stopped.

In eight states like Uttar Pradesh, Madhya Pradesh, Rajasthan, Tamil Nadu, Bihar, Gujarat, Karnataka and Maharashtra, more than 50 lakh first doses of the vaccine have been administered to the age group of 18-44. In Andhra Pradesh, Assam, Chhattisgarh, Delhi, Haryana, Jharkhand, Kerala, Telangana, Himachal Pradesh, Odisha, Punjab, Uttarakhand and West Bengal, more than 10 lakh beneficiaries in the age group of 18-44 have been given the first dose of corona.

More than 100 cases coming out from 73 districts

Health Ministry’s Joint Secretary Luv Agarwal said that 31,443 cases of corona have been registered in the country in the last 24 hours. There has been a decrease of 6 percent in corona cases since last week. Now there are only 73 districts in the country where more than 100 corona cases are coming to the fore every day. Luv Aggarwal said that under the new package of COVID, about 20,000 new ICU beds will be prepared. Out of this, 20 percent beds will be pediatric beds. A pediatric unit will also be formed in every district. Under this package, more than 8,800 ambulances will be arranged separately.

read this also: Kerala: Two people including a doctor were found infected with Zika virus, the number of patients in the state increased to 22