Well Done: This 10-year-old boy won Akshay Kumar’s heart, you will also be proud to know the reason 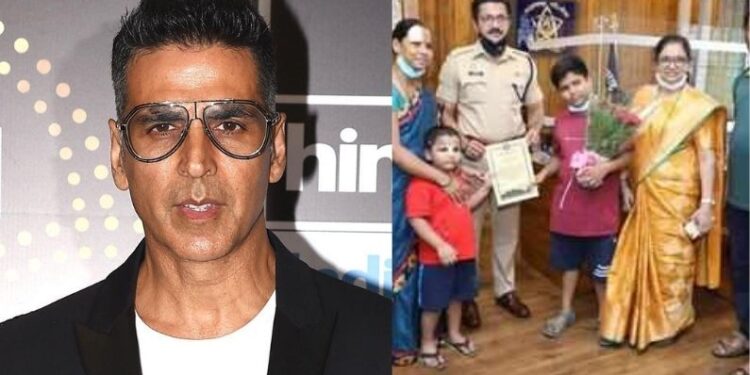 The name of the boy Akshay Kumar has made this special tweet about is Shree, Shree has saved the life of his entire family with the help of Karate, where this boy’s entire family was about to drown in water.

Bollywood’s Khiladi Kumar i.e. Akshay Kumar is considered to be the action hero of Hindi cinema. Where the actor is famous all over the world for his martial arts and his strong karate skills. Akshay wants that every person should know this art. Because of which he constantly helps children to learn karate and martial arts. In such a situation, the actor has praised a ten-year-old child in a tweet shortly before now. Yes, this child has saved his entire family from drowning in water by breaking the glass of the car. As soon as Akshay came to know about this, he immediately praised it by posting a post about this child.

The name of this child is Mr. Bhayde, the entire family of this child was crossing the Kashid bridge on the Murud-Alibag road in Raigad. Where the SUV car of this family got stuck in the middle. The flow of water was high, due to which the water started filling up rapidly inside the car and all the doors of the car got jammed automatically. Because of which there was no longer any way to get out. But in the meantime Shri’s mind lost his mind and this little kid broke the windscreen of the car with his own strength. Shree hit the windscreen until it was completely broken. Shree came out after the windscreen broke, after which he helped his family in the car to get out of the car.

Seven years of Karate training helped this 10-yr-old boy save his family’s, and his own life.Well done, Shree!Proves my belief that martial arts are not mere sports,they are true life savers.Learn self defence techniques,waqt padne pe bahot kaam aati hain.https://t.co/QnpUCBKvyF

Akshay Kumar was astonished as soon as he heard the news of this little kid’s exploit, he wrote while doing his special tweet, “Seven year old karate practice helped this 10-year-old boy to save his family and his life.” of. Well done, Mr! This proves my belief that martial arts are not just a sport, it is a life saver. Learn self defense techniques, it is very useful to read the time. Akshay Kumar has been participating fiercely in events for self-defense skills in Mumbai for the last several years. Where the actor has started many classes in association with the Yuva Sena of the Government of Maharashtra.

On the work front, Akshay Kumar was recently seen with Nupur Sanon in his song ‘Filhaal 2’. Where the actor is shooting his next film Rakshabandhan in Mumbai these days.

Also read:- ‘Ram Teri Ganga Maili’ fame Mandakini is ready to return to the industry, everyone’s senses were blown away by bold scenes