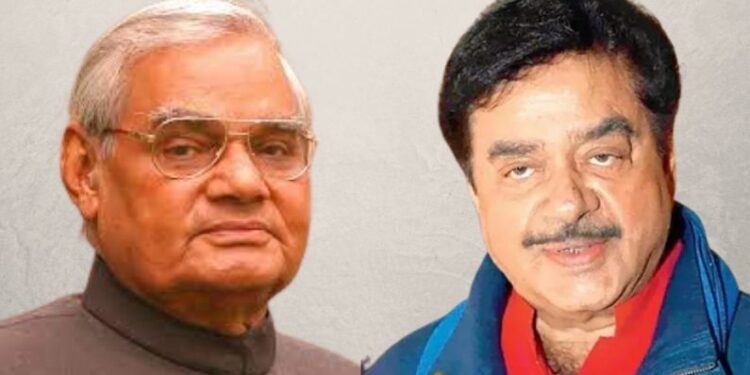 Let us tell you that these days there is a lot of discussion about Shatrughan Sinha going to Trinamool Congress. It is being said that Shatrughan Sinha may join the party on the occasion of Martyrdom Day celebrations of TMC on 21st July.

Actor-turned-politician Shatrughan Sinha expresses his opinion with impunity. When he used to be in the Bharatiya Janata Party (BJP), he did not leave any such opportunity when he did not target his own party. Now, when Shatrughan Sinha is a member of Congress, he has once again been vocal against the BJP. On Monday, Shatrughan Sinha, while sharing a video on his Twitter account, targeted the BJP over the rising prices of petrol. Amidst rising petrol prices, Shotgun i.e. Shatrughan Sinha has remembered former Prime Minister of the country Atal Bihari Vajpayee.

The video shared by Shatrughan Sinha on Twitter is from the time when Atal ji demonstrated against the increased petrol and kerosene prices in 1973. In this video you can see Atal Bihari Vajpayee reaching Parliament in a bullock cart. This incident of 1973 was very much discussed. At that time there was a Congress government at the center and Indira Gandhi was the Prime Minister. This method of protesting against Atal Bihari Vajpayee was not only covered in the Indian media, but it also found a place in international newspapers like The New York Times.

Way back when petrol prices were increased by 7 paise per litre in 1973, opposition leaders led by Bajpaiji, had travelled to the Parliament on a bullock cart. A rare video of that event. 😊 pic.twitter.com/gVekcNAKhO

Now taking the basis of this video, Shatrughan Sinha targeted the same ruling BJP, which had expressed its protest against the rising petrol prices in 1973. It was only a few days ago when Shotgun praised Prime Minister Narendra Modi. During a special conversation with NewsNCR, Shotgun was seen as a fan of PM Modi’s energy. In one moment Shatrughan Sinha praises someone, then in the second moment he does not hesitate to speak against him. This video of Atal ji is an example of that. Just a few days ago, Shatrughan Sinha was praising PM Modi and now he is targeting his party over petrol prices. Shatrughan Sinha seems to be once again disillusioned with PM Modi.

Let us tell you that these days there is a lot of discussion about Shatrughan Sinha going to Trinamool Congress. It is being said that Shatrughan Sinha may join the party on the occasion of Martyrdom Day celebrations of TMC on 21st July. However, there is no official confirmation of this yet. If these speculations are to be believed to be true, then it seems that Shotgun has now become disillusioned with the Congress, as he did while in BJP. Let us tell you that Shatrughan Sinha started his political career with the Bharatiya Janata Party. However, he used to speak very vocally against his own party, as a result of which he was sidelined. After this Shotgun joined the Congress party.

Also read- Lookalike: This lookalike of Divya Bharti is as talented as her, has won many beauty contests