Video: Aamir Khan and Kiran are close to each other despite the announcement of divorce, dance together in Ladakh 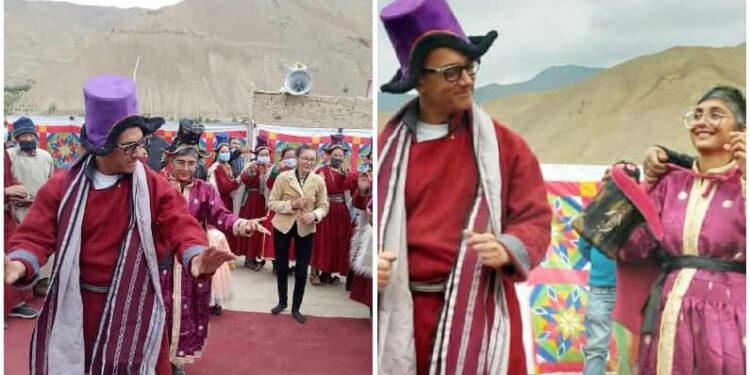 Aamir Khan and Kiran Rao may not be together as husband and wife, but professionally both are still together. Now a video of both of them from Ladakh is becoming quite viral on social media, seeing which the fans are very happy.

Aamir Khan and Kiran Rao surprised the fans after seeing the news of divorce a few days ago. After 15 years of marriage, both have separated. However, both also told that whatever projects they were working together or would do, they would do it together. These days Aamir and Kiran have reached Ladakh for the shooting of the film Laal Singh Chaddha. Taking a break between shoots, Aamir and Kiran are having a lot of fun with the people there. Aamir and Kiran are dancing with them wearing traditional outfits there.

During this, Aamir is wearing a red color outfit with a purple hat, while Kiran is wearing a dark pink color dress with a green hat. A woman is teaching him dance and Aamir, Kiran are dancing seeing him. As soon as both of them start dancing, everyone starts shouting with happiness. Actually, in a village in Ladakh, the people there welcomed the entire team of the film and during this everyone had a lot of fun.

Another video of Aamir with children is going viral in which he is dancing with some children. Seeing these videos, it is clear that Aamir, Kiran and the entire team of the film are enjoying a lot while shooting there.

What did Aamir say on separation?

Aamir had issued a statement on separation and wrote that in the beautiful journey of 15 years, we enjoyed a lot of good moments and the trust, love and respect in our relationship has only increased. Now we are about to start a new chapter of our life, but not as husband and wife but yes as a co-parent. We had decided to part ways sometime back and are now sharing it with everyone. We will raise son Azad together.

together in professional life

We will complete all the films we have, Paani Foundation and whatever other projects we have together. You will not see this divorce as the end but as the beginning of a new journey.

read this also- Video: Neha Kakkar was seen in this style with her husband at the airport, fans are asking- Are you pregnant?