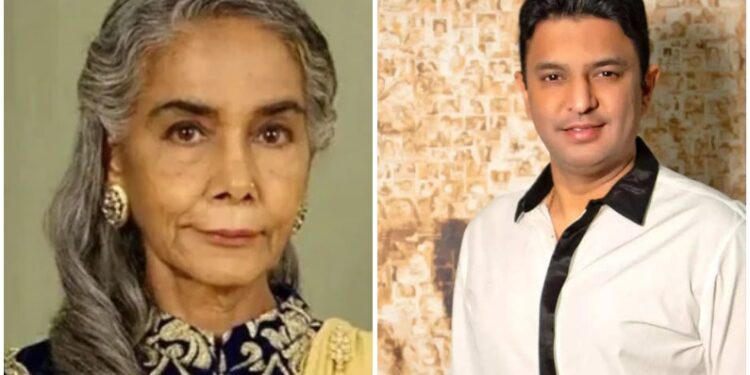 If you have missed the big news related to the entertainment world of Friday, then you can read about them in detail in Entertainment Top 5.

In the entertainment world, such news comes every day, which sometimes brings a smile on the face of people, and sometimes makes them disappointed. Even on 16th July i.e. Friday, all the news from Bollywood to TV remained in the headlines. On one hand, where Surekha Sikri has left this world saying goodbye, Bhushan Kumar has been accused of rape by a woman. If you have missed the big news related to the entertainment world of Friday, then you can read about them in detail in Entertainment Top 5.

National Award winning actress Surekha Sikri has passed away in Mumbai. The actress was ill for a long time. In 2020, Surekha became a victim of brain stroke. According to reports, the actress died on Friday morning due to a heart attack. She was battling complications due to a second brain stroke.

Please tell that Surekha did a lot of work in theatre, film and TV. He made his debut in the year 1978 with the political drama film Kissa Kursi Ka. Surekha had worked in many films after this. Not only this, Surekha has received the National Award for Supporting Actress 3 times.

According to reports, the complainant alleges that the incident was carried out at different places in Mumbai. The victim also alleged that threats were being made to make her photos and videos viral. However, till now no statement has come from Bhushan Kumar or his team in this matter.

Is Karan Johar’s dream project ‘Takht’ locked? The starcast of this film was strong

After ‘Ae Dil Hai Mushkil’ in 2016, Karan Johar is set to take up the reins of direction once again after nearly five years with his upcoming period film ‘Takht’. Decision was taken. But now a big update has come out about Karan Johar’s dream project, which may shock the fans of Karan.

It is being said that the film Takht was a film based on the controversial Mughal history. The budget of this film was also very tight. It was a powerful and expensive historical costume drama film. Karan Johar was producing this film in association with Fox Star Studios, but due to some reasons, Fox Star Studios broke all its ties with the film ‘Takht’, perhaps one of the reasons could be that the financial loss In view of this, Karan Johar is not making Takht at the moment.

‘Ram Teri Ganga Maili’ fame Mandakini is ready to return to the industry, everyone’s senses were blown away by bold scenes

Today everyone is aware of Bollywood’s top actress Mandakini. His superhit film ‘Ram Teri Ganga Maili’ is still very much liked by the audience. Actress Mandakini, who entered Bollywood in the 80s, is still a big name of Bollywood. The actress made a strong debut in Bollywood with her film ‘Ram Teri Ganga Maili’. This film was made by Raj Kapoor and in this film we saw Rajiv Kapoor in the lead role along with the actress. In this film, the waterfall scene of the actress was very much discussed. The real name of the actress is Yasmin Joseph but she changed her name due to lack of work in films. In such a situation, it is now reported that the actress is going to make her comeback in Bollywood very soon.

Season 13 of Bollywood megastar Amitabh Bachchan’s famous show Kaun Banega Crorepati Season 13 is going to be back on TV very soon. Where the information about the launch of this show has also become a branded entertainment. Yes, this show, which is liked across the country, is now being promoted in a very different way. Famous filmmaker Nitesh Tiwari has made a short film of 3 parts to promote this show. Which will be released soon. Its first glimpse has come out. Which is awesome.

Specially shot in Berchha, Madhya Pradesh, actor Omkar Das Manikpuri is playing the lead role in this film. Omkar Das Manikpuri works a lot in films and plays, and he is also very famous. Where there are many characters in this story who live in a village. There is no school in the village. Because of which everyone is upset. But in the meantime Amitabh Bachchan’s Kaun Banega Crorepati ad goes on and everyone sees it. As soon as this ed ends, the real story of the village begins.