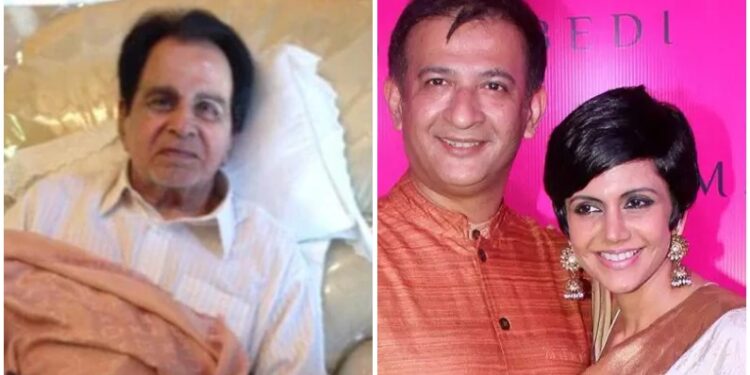 If you have missed the big news related to the entertainment world of Wednesday, then you can read about them in detail in Entertainment Top 5.

In the entertainment world, such news comes out every day, which sometimes brings a smile to the faces of the people, and sometimes makes them disappointed. Even on 30 June i.e. Wednesday, all the news from Bollywood to TV remained in the headlines. While everyone is shocked by the death of Mandira Bedi’s husband, on the other hand, Dilip Kumar has again been admitted to the hospital. If you have missed the big news related to the entertainment world of Wednesday, then you can read about them in detail in Entertainment Top 5.

Raj Kaushal, husband of actress Mandira Bedi, has passed away. This news has shocked the fans as well as the people of the industry. According to reports, Raj has died at home due to heart attack. Raj had a party with friends on Sunday itself. On Monday, he shared a photo with Mandira and friends and told that he had a wonderful Sunday.

After pneumonia, Naseeruddin Shah was admitted to the hospital, know how is the actor’s condition now

Veteran actor Naseeruddin Shah has been hospitalized due to pneumonia. Naseeruddin’s manager has given this information. Also he told that the condition of the actor is stable now. Naseeruddin is accompanied by wife Ratna Pathkar and children in the hospital.

The trailer of Farhan Akhtar’s much-loved film Toofan has been released. Today, the producers of this film released this trailer after being exposed to the media. In which the starcast included Farhan Akhtar, Mrinal Thakur, Paresh Rawal. The film is produced by Rakeysh Omprakash Mehra and Ritesh Sidhwani along with Farhan Akhtar. Toofan will release on July 16 on the OTT platform Amazon Prime.

This is the story of a boxer storm who used his talent in street fight earlier. Then he got a coach who later changed his life. The storm that created a storm again in the world of boxing, made it a name for the whole world.

Kangana Ranaut raged on Taapsee Pannu, said- The one who used to beg the producers to ask for my abandoned films, today its…

There is always a rift between Taapsee Pannu and Kangana Ranaut. Both of them keep arguing on some issue or the other. While Kangana once called Taapsee a cheap copy, Taapsee asked Kangana to use a double filter. Kangana used to speak through Twitter, but then her account was blocked.

Recently, Taapsee gave a statement that she is not missing Kangana on Twitter. Taapsee said, ‘He has no meaning in my life. He is an actor and for me a co-actor. That’s all they mean to me. There is nothing more to me than this. I have nothing in my mind for them, neither good nor bad. You like or dislike someone when he is in your heart, but he is not that important in my life.

Dilip Kumar admitted to Hinduja Hospital in Mumbai, is having trouble in breathing

Veteran actor Dilip Kumar has been admitted to Hinduja Hospital in Mumbai. They are having trouble breathing. Yesterday in the day when he was getting this continuously, the family members did not delay in taking him to the hospital.

98-year-old Dilip Kumar was discharged from Mumbai Hinduja Hospital ten days ago. Here he was admitted after complaining of water filling his lungs. After about ten days of treatment, when he started feeling comfortable, he was discharged. In such a situation, there is a lot of concern in the minds of the fans due to the news of his early hospitalization. He is constantly praying for his speedy recovery.