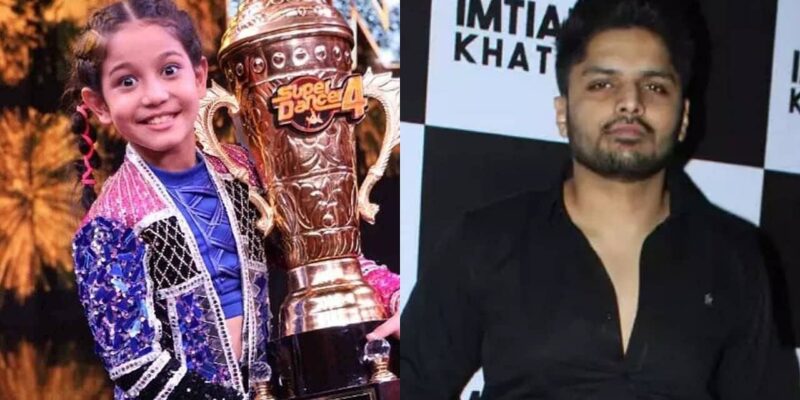 Fans are very excited to know the news of film and TV industry. These celebs remain a part of the headlines due to the news happening every day. Saturday was also very important in terms of news. While the grand finale of the dance reality show Super Dancer Chapter 4 took place on Saturday, on the other hand NCB raided the house and office of Bollywood producer Imtiaz Khatri. Many such news dominated from Bollywood to Hollywood on Saturday, so let’s know the big news of the entertainment world on October 9, 2021.

Super Dancer Chapter 4 has finally found its winner. Florina Gogoi of Assam has won the ‘Super Dancer’ trophy by winning the hearts of the judges as well as the audience. Along with Florina, her super guru Tushar Shetty has also become the winner of this season. From the first episode, Florina won the hearts of the judges with her innocence and naughty acts along with her dance. In his journey, Florina’s super guru Tushar Shetty worked hard on him and now finally this hard work has paid off.

Apart from Florina, Prithviraj, Sanchit Chanana, Esha Singh, Neerja also managed to make their place in the finalists of Super Dancer Chapter 4. This super dancer, which lasted more than 6 months, started with 15 contestants. Out of these 15 contestants, only 5 contestants managed to make their place in the grand finale. The special thing about Super Dancer Chapter 4 is that in this children’s dance reality show, every contestant got the support of a super guru. From the beginning, this super guru keeps a close watch on his disciple and trains him well in dance.

Producer Imtiaz Khatri’s house raided by NCB, allegations have been made of supplying drugs

NCB is currently conducting raids at many places in the drugs case. Shahrukh Khan’s son Aryan Khan was also arrested after raiding the cruise. Now the house of NCB Bollywood producer Imtiaz Khatri is being raided in the drugs case. Along with Imtiaz’s house, there is a raid at the office as well.

Imtiaz has connections with big stars of Bollywood. He has already been accused of supplying drugs in the case of Sushant Singh Rajput.

Shahrukh Khan’s son Aryan Khan was arrested by the NCB in the drugs case. Aryan is currently in judicial custody for 14 days. Aryan’s arrest in drugs case is affecting his father Shahrukh. Shahrukh’s work is being affected and he has got a big setback.

Shahrukh Khan is the brand ambassador of the learning app BYJU. After Aryan’s arrest, Shahrukh’s Byju’s has banned all advertisements. The release of Shahrukh’s pre-booking ad has also been banned.

Actor Siddharth Narayan, who has acted in films like ‘Rang De Basanti’, clarified that his recent ‘Cheater Never Prosper’ tweet by his ex-girlfriend Samantha Ruth There was no sarcasm on Prabhu (Samanth Ruth Prabhu). Let us tell you that recently Samantha had recently announced her separation from her husband Naga Chaitanya, after which questions were raised on Samantha’s character.

Meanwhile, Siddharth also made such a tweet, about which it was said that he has called Samantha a cheater. However, he has now clarified his tweet. Siddharth says that he only tweeted about his life and he did not point to anything else. In a video released by NTV Telugu, Siddharth was questioned about his recent tweet.

Reportedly, the film will be made in three parts with a budget of Rs 750 crore. Bollywood Hungama, quoting sources in one of its reports, has written this news that a close close to the production claims that Hrithik is being paid Rs 75-75 crore to play Ravana and Ranbir to play the role of Ram.

IPL 2021: Delhi-Chennai battle in powerplay, qualifiers will be decided by the collision of 2 players