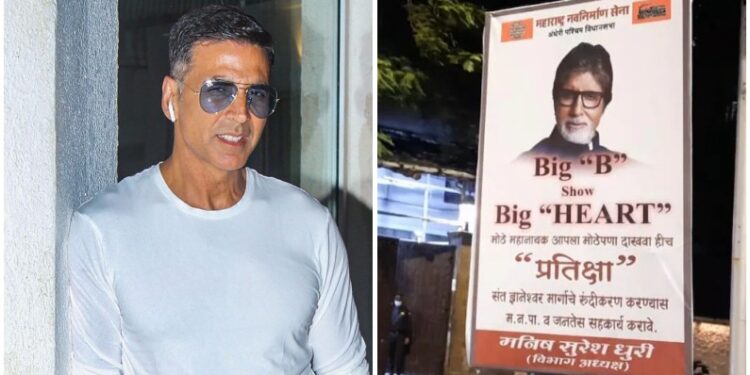 If you have missed the big news related to the entertainment world of Thursday, then you can read about them in detail in Entertainment Top 5.

In the entertainment world, such news comes every day, which sometimes brings a smile on the face of people, and sometimes makes them disappointed. All the news from Bollywood to TV remained in the headlines even on 15th July i.e. on Thursday. While MNS is opposing Amitabh Bachchan, Akshay Kumar has started his professional master class. If you have missed the big news related to the entertainment world of Thursday, then you can read about them in detail in Entertainment Top 5.

Maharashtra Navnirman Sena has put up a banner outside the waiting bungalow of Bollywood megastar Amitabh Bachchan located in Juhu, Mumbai. Actually the road is not getting widened due to Big B’s bungalow waiting. BMC remove a wall of this bungalow. wants. So that you can get rid of the day-to-day jam.

But even before BMC’s action, Raj Thackeray’s party Maharashtra Navnirman Sena (MNS) pasted a poster on Wednesday. And in a very different way, this poster outside ‘Pratiksha’ appeals that the line of this poster, ‘Big B big heart show’, seems to be the policy of Gandhi Giri. Perhaps for this purpose, the Maharashtra Nav Nirman Sena put up a poster and appealed to show a big heart.

Bollywood actress Kareena Kapoor gave birth to her second son in February this year. Kareena has named her younger son Jeh. Kareena had not yet shown the glimpse of Jeh to the fans. He has shared some pictures but the face of the younger son was not visible in them. But now a picture of him is going viral on social media.

A picture of Kareena Kapoor with a child is going viral in which she is seen kissing on his forehead. Fan pages are saying that this is Kareena’s younger son Jeh. Although Kareena has not shared any picture with Jeh on her social media account. We do not confirm the presence of Jeh with Kareena in this photo.

Bollywood actor Akshay Kumar is known for his superb acting. He often makes films on social issues which win the hearts of the fans. Many people take inspiration from Akshay Kumar to become an actor. He wants to be like Akshay. But becoming a successful actor like Akshay Kumar is not easy. You have to work hard for that. Now Akshay is going to teach acting to people online.

Akshay has shared a video on social media. While sharing the video, he wrote – When I was trying to become an actor, we never got a chance to learn it formally. Now the time has changed you can now attend my professional masterclass and learn something from my 30 years journey.

The Delhi High Court has once again given a setback to the father of Sushant Singh Rajput. Instead of taking any strict action against the film Nyay The Justice, the High Court has asked Sushant’s father KK Singh to settle the matter through talks with the makers of the film.

The High Court broke the hearts of millions of Sushant’s fans by refusing to take any action on Sushant’s father’s plea to ban the film. Justice Rajiv, who is heading the two-judge bench, said that this does not seem to be a matter which cannot be resolved through talks outside the court. This proposal of the court was accepted by the lawyers of both the parties. Now through talks, an attempt will be made to find a solution whether according to Sushant’s father, he changes the story of this film or not.

What is the big plan for ‘Outsiders’ in Bollywood, Taapsee Pannu will give a chance as a producer

Bollywood actress Taapsee Pannu wins the hearts of fans every time with her acting. His films are well liked. The story of Taapsee’s films is quite different, for which she also has to work hard. After working for more than a decade in Bollywood, now Taapsee has decided to become a producer.

Taapsee Pannu has launched her production house Outsiders Films today. About which he has given information by sharing a post on social media. Taapsee has joined hands with Pranjal Khandhadia for this production house. Pranjal is producing many films like Super 30, Piku, Soorma. He is also producing Taapsee’s film Rashmi Rocket.