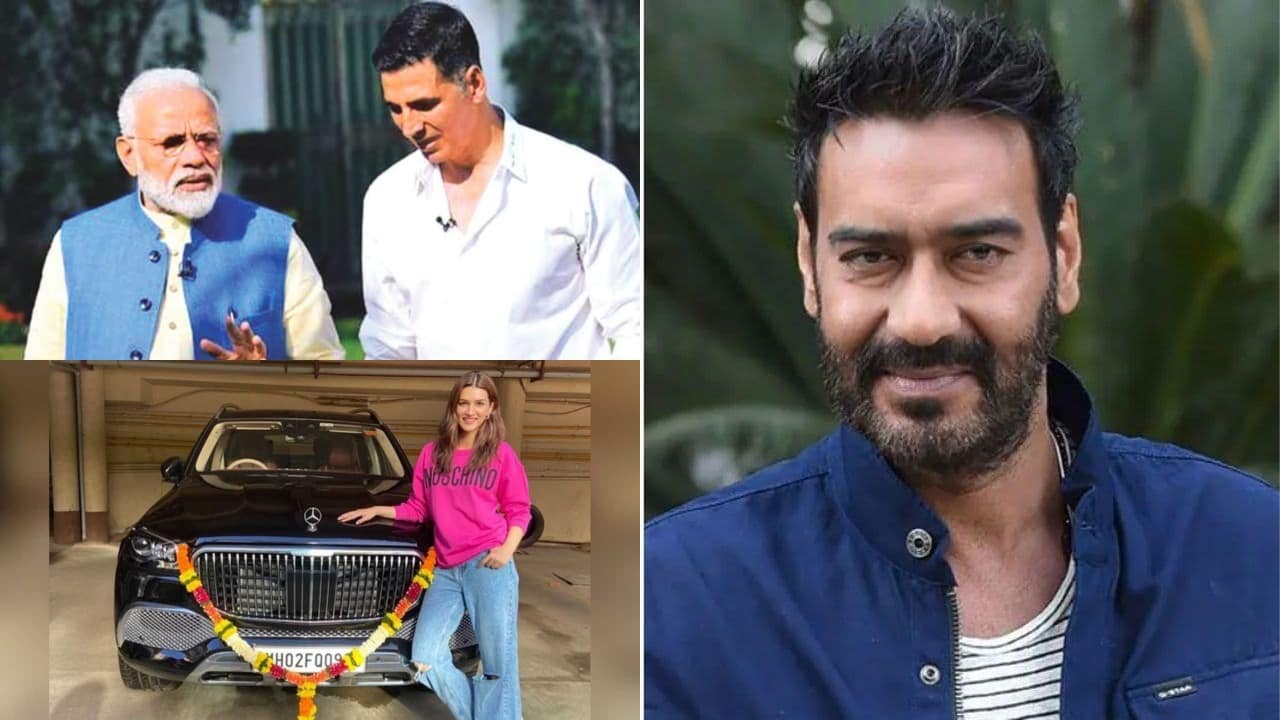 Many big news remained in the headlines on Sunday. So let’s know the big news of entertainment world of September 12 in Entertainment Top 5.

Everyday something new happens in the entertainment world, which the fans are eager to know. Fans are very interested to know about the news related to their favorite star. In such a situation, a lot happened in the entertainment industry on Sunday too. On one hand, where Akshay Kumar wrote a letter to the PM after the death of his mother, Ajay Devgan will be seen doing action in the jungle. In this way, from Bollywood to TV, many big news remained in the headlines on Sunday. So let’s know the big news of entertainment world of September 12 in Entertainment Top 5.

Ajay Devgan will show action in the jungle, Maldives out for shooting

After Thalaiva Rajinikanth and Bollywood player Akshay Kumar, Ajay Devgn is now going to show his survival skills to his fans. If you do not understand, then let us tell you that Ajay Devgan is going to be seen in a special episode of ‘Into the Wild with Bear Grylls’. After Akshay and Rajinikanth, Ajay Devgan has now been signed by Discovery Channel for this popular show.

Shooting for the show ‘Into the Wild with Bear Grylls’ was done at Bandipur National Park and Tiger Reserve in Karnataka by Akshay Kumar and Rajinikanth. At the same time, the show will be shot by Ajay Devgan in Maldives, for which he has left for Maldives from Mumbai. According to online media reports, Discovery Channel has confirmed that Ajay Devgan has taken a chartered flight to Maldives.

Bollywood actor Akshay Kumar lost his mother on 8 September. Akshay Kumar came back to Mumbai from London to meet his mother on September 6, but his mother died on September 8. After the death of the actress’s mother, many big Bollywood stars had also reached her house to meet her. Where many big stars also wrote a tribute post for him on social media. In such a situation, now the Prime Minister of the country, Narendra Modi has sent a condolence message to Akshay Kumar. Where the actor has shared a post related to it on his social media.

Let us tell you, Akshay Kumar has shared PM Modi’s condolence letter on social media. In this letter, PM Modi wrote, “My dear Akshay, it would have been best if I never wrote such a letter. In an ideal world such a time should never have come. I am saddened to hear about the demise of your mother, Aruna Bhatia.

Kriti Sanon made this record by becoming the owner of this expensive vehicle, discussion is happening everywhere

Bollywood actress Kriti Sanon is in discussion about her strong films in Bollywood these days, so now the actress has bought a very luxurious car for herself. For which she has now come in the discussion, you should also know about this vehicle. Recently she was seen in the film Mimi. Everyone liked this film and Kriti’s strong acting. At the same time, now the gorgeous actress Kriti Sanon has once again come into the limelight and this time her new vehicle has brought her in the news, not a film.

Kriti Sanon recently bought a Mercedes-Benz Maybach GLS 600 luxury car. With becoming the owner of this vehicle, you have also made a new record. Let us tell you that Kriti has become the first Bollywood actress to have a luxury vehicle like Mercedes-Benz Maybach GLS 600 in her garage. Before this, no Bollywood actress has bought such an expensive car. And everyone came to know about this new guest in her life when Kriti reached the office of film producer, Dinesh Vijan with her new car. After which Kriti’s new sparkling black car was captured in the paparazzi’s camera.

Bollywood actress Kareena Kapoor Khan is very active on social media. Kareena is also known for her dressing sense. She has been a part of the headlines for the past few days. Today she has come into the discussion about her outfit. Kareena was seen in a simple T-shirt of white color today, which is said to be very expensive. People are surprised to know the price of Kareena’s T-shirt.

Kareena was spotted in Mumbai this morning. His morning look was quite casual. She wore a Gucci brand’s Simple C Graphics T-shirt. With this, he had put on black color tights, matching boots and orange sunglasses. The cost of this T-shirt of Kareena is 50 thousand rupees. After knowing this, she is getting trolled on social media.

Now Akshay Kumar’s ‘Bell Bottom’ will show on Amazon Prime, will be streaming on this day

Amazon Prime Video has announced today that it will exclusively stream the premiere of Akshay Kumar starrer spy thriller film Bell Bottom. Prime members in India and in over 240 countries and territories can stream the film on Amazon Prime Video from September 16, 2021. Directed by Ranjit M Tiwari, the film features an exciting line-up of stars including Vaani Kapoor, Huma Qureshi, Lara Dutta, Adil Hussain and Anirudh Dave apart from Akshay Kumar.

Bell Bottom is produced by Vashu Bhagnani, Jackky Bhagnani, Deepshikha Deshmukh, Monisha Advani, Madhu Bhojwani and Nikhil Advani under their respective banners Pooja Entertainment and Emme Entertainment. This action-packed thriller is going to present a thrilling adventure on the OTT platform. Inspired by the real incidents of plane hijacking that happened in the 80s, this story depicts the unmatched might of an unknown hero named ‘Bell Bottom Code’.

Photos: 88 experts from 13 states together found 55 species of butterflies in 2 days, one is ‘Tiger’ in name only