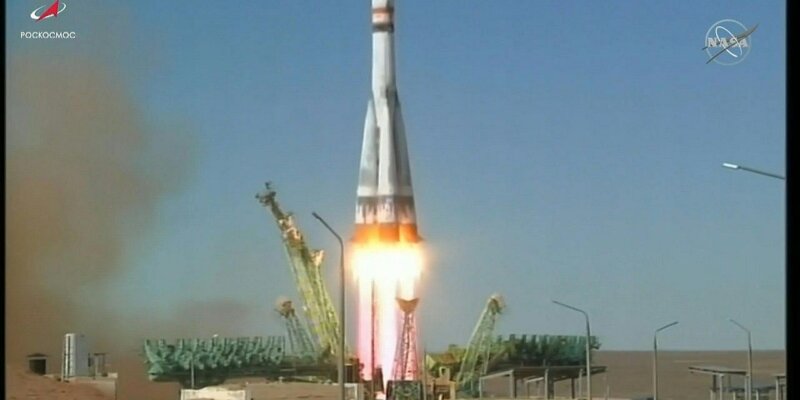 The Russian actress and director left on her space journey on Tuesday to shoot the world’s first film in space. Actress Yulia Peresild and director Klim Shipenko on Tuesday left for the International Space Station on a Russian Soyuz spacecraft. Veteran traveler Anton Shkaplerov, who has completed three space journeys, has also accompanied him.

Spacecraft Soyuz MS-19 took off from the Russian Space Launch Facility at Baikonur, Kazakhstan at 1:55 pm as per the schedule. Space officials said all aboard the spacecraft were feeling well and that all systems of the spacecraft were working normally. Actress Yulia and director Shipenko will film a part of a new film “Challenge” there. In the film, Yulia, playing the role of a doctor, travels to the space station to rescue a crew member who is suffering from a heart ailment.

These people will return with another astronaut after staying on the space station for 12 days. This is the first time that a film is being shot in space. In a press conference on Monday before taking off, actress Yulia Peresild admitted that it was difficult to juggle the strict discipline and tough training during the training. The actress said, ‘It was mentally, physically and difficult in all forms.’ He said, ‘But I think once we achieve the goal, then everything will not look so difficult and we will remember it all with just a smile.’

Dmitry Rogozin played an important role in this project

Shipenko (38), who has made several commercially successful films, also described his training to fly in spaceship in just four months was very difficult. “It is true that we cannot do much in the first attempt, and sometimes in the third attempt too, but it is normal,” he said. Dmitry Rogozin, the head of Russia’s state-run space corporation Roscosmos, is playing an important role in making this project a reality. Rejecting the criticism of the Russian media in this regard, he called it a matter of pride for the country in the field of space.

Shooting in the space station can be difficult

Some have commented that the film project would cause problems for members of the space station, and that shooting in the Russian part of the space station could be difficult because it was smaller than the American side. The new Russian module ‘Nauka’ was added to the station in July but is not yet fully integrated with the station.

After arriving at the space station, the three new passengers will be joined by Thomas Pesquet of the European Space Agency, NASA astronauts Mark Vande Hei, Shan Kimbrough and Megan McArthur, Oleg Novitsky and grandsons Dubrov of Roscosmos, and Aki Hoshide of the Japan Aerospace Exploration Agency. . Roscosmos’ Oleg Nowitsky will play a sick astronaut in “Challenge” and will also be the captain of the Soyuz returning to Earth on October 17.

What is a rave party, what happens there, how did the dance party of the 80s become Rave Party, where even drugs and sex are free?

Maharashtra: About 19000 thousand families of Pune will get 50000 help, those who lost their loved ones in Corona will get support