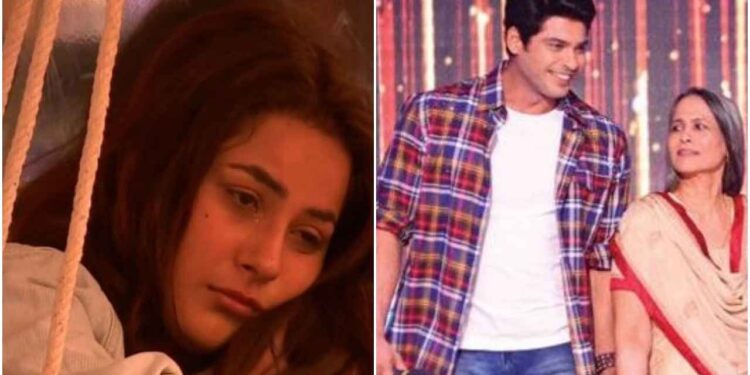 Due to the death of Siddharth Shukla, a mountain of sorrow has broken on the actor’s mother and Shahnaz Gill. But in the meantime, Siddharth’s mother Rita is taking full care of Shehnaaz Gill. She is not leaving Shahnaz even for a moment.

Siddharth Shukla has left all of us this month. His family, friends and fans are in shock due to Siddharth’s departure. Shehnaaz Gill, who loves Siddharth very much, is broken. Shahnaz was crying a lot during the last rites of the actor. At that time his brother Shahbaz took care of him. Let us tell you that after the departure of Siddharth, Shahnaz has given up eating and sleeping.

According to the report of Bollywood Life, Rita is motivating Shahnaz to go back to work. She is asking him to meet friends so that he can forget his sorrow and focus on work.

Motivating Shahnaz to return to work

There is also news that Rita does not want Shahnaz to always mourn and go into depression. Shehnaz will have to live her normal life by keeping herself busy with work, only then she will be able to come out of Siddharth’s sorrow.

Such was the condition of Shahnaz during the funeral

Rahul Mahajan had told that when Siddharth’s body was brought for the last rites, Shahnaz screamed that mother, my child. Not only this, she was repeatedly rubbing Siddharth’s feet knowing that the actor is no longer in this world. Shahnaz was fainting again and again.

what was the wedding plan

After the death of Siddharth, there was news that both were planning to get married, but before that the actor left this world.

what happened that night

Rahul Mahajan had told in an interview that the night before the actor’s death, he had come from outside for dinner. Although he eats food at home, but that night he came after eating from outside and then went to sleep. Late in the night he was feeling a little bad, after which he drank water and then went to sleep. After this Siddharth did not even wake up the next morning. When Siddhartha was taken to the hospital, the doctor declared him brought dead.