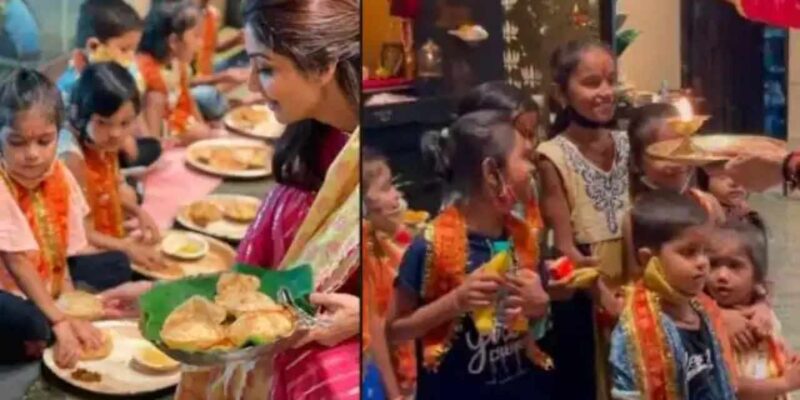 Bollywood actress Shilpa Shetty was in the headlines for a long time because of her husband. The actress’ husband Raj Kundra is currently on bail for making obscene films. At the same time, talking about Shilpa, the actress is very active on social media. The actress keeps sharing special photos for the fans every day. Let us tell you that today again the actress has shared such a pic which has been covered.

Shilpa Shetty is celebrating the special occasion of Navratri, that is why she is sharing videos and photos while worshiping Maa Durga on this festival. Recently, Shilpa has shared a photo on Instagram states, which has been covered.

Let us tell you that this beautiful actress has shared pictures of Kanjak Pooja on her account. In which you can see how Shilpa Shetty is performing the aarti of the girls and is also feeding them with her own hands. In this video, Shilpa clearly shows how lawfully she worships the mother.

The actress has shared some more photos, in one of which the idol of Maa Durga kept in her temple is seen. Shilpa is seen serving puris to the girls with her own hands. Not only this, the actress is worshiping the girls with aarti plate and showering flowers on them.

Now this devotional video of Shilpa Shetty has become popular among the fans. Fans are very fond of this special style of the actress. Everyone is praising the actress a lot for this. Well not the first time It is only when Shilpa has shared any photos or videos of worship lessons, before that she also shared a lot of photos of Ganpati festival.

High amount of moisture in paddy became a cause of concern for the farmers and arhtiyas, accusing the procurement agencies of arbitrariness

Farmer family preparing for agro tourism along with religious in PM Modi’s Kashi, know what will be the arrangements