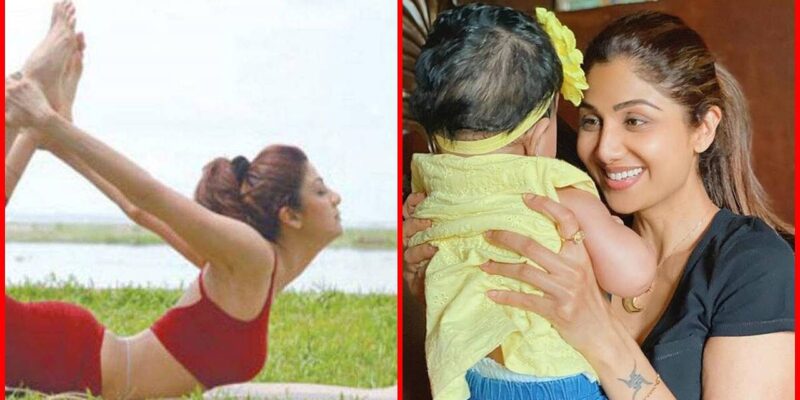 Every young child is sometimes asked by their parents to entertain the guests coming home. Bollywood celebrities are also not behind in this.

In Sony TV’s dancing reality show ‘Super Dancer Chapter 4’, when Contestant Anshika Rajput’s mother Padmini Kolhapure and Poonam Dhillon came as guests on the show. (Poonam Dhillon) asked this question that ‘the way people in common man’s house ask their young children to dance in front of the guests or show their talent, in the same way do they get their children to do this too?’ Even though this question was for the guest judges, Geeta Kapoor made a big revelation by making a shocking disclosure about Shilpa Shetty.

Geeta Kapoor said that even Shilpa Shetty gets this done by her little girl. He further said that Shilpa’s daughter Samisha is only one and a half years old. But still, Shilpa, sitting with love, makes her daughter do yoga in front of everyone. She tells Samisha that Samisha should do yoga and her daughter also raises her hands after listening to her mother’s voice and does the action of ‘Yoga’ as she can. Shilpa Shetty started laughing after hearing this.

Shilpa also used to dance in front of the guests

It seems, Shilpa Shetty has got this habit from her parents. After listening to Geeta Kapoor, he said that my parents also used to make me dance. Although I didn’t need to tell anyone. I used to start as soon as I heard the ‘D’ of the dance. And used to dance in front of the guests. Hearing his words, everyone laughed a lot. So Anurag Basu jokingly said that my father used to send me to the room inside the house when the guests arrived.

So Padmini Kolhapure while answering this question said that not her mother but her grandmother used to make her dance a lot. Especially in front of his aunt. Let us tell you, music queen Asha Bhosale is the aunt of Padmini Kolhapure. Padmini further said that whenever her aunt used to come, Padmini’s grandmother used to ask her to dance in front of Asha Bhosle. She said that she danced so much in her childhood that she decided that she would not make her children do all this.

Parineeti Chopra shared the video in swimsuit, the actress posed like this in the pool

Honsla Rakh Trailer: Trailer of Diljit Dosanjh and Shahnaz Gill’s film will be released on this day, new poster surfaced