Shilpa Shetty and Raj Kundra are getting trolled badly, by making memes people are saying – ‘Above super’ 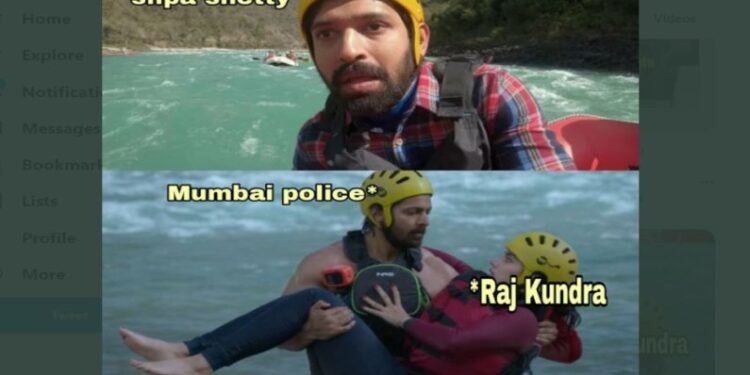 Businessman Raj Kundra is badly trapped in the charge of making pornographic films. On Monday, the team of Mumbai Crime Branch arrested him. As soon as this news came out, the matter got heated on social media and users are busy trolling Raj Kundra-Shilfa Shetty fiercely.

Raj Kundra and Shilfa Shetty are getting trolled fiercely on social media.

We all know that as soon as a matter comes to the fore, the atmosphere on social media heats up. Mimsena immediately becomes active and starts commenting in a funny way. Especially, when it is a matter of big personalities and the matter is negative, then what to say? You can guess this from the fact that #RajKundrarrest and #ShilpaShetty are trending top on Twitter. Regarding both, users are chatting while sharing funny memes one after the other.

One user wrote, ‘Shilpa Shetty is busy in giving knowledge of yoga to the world, Raj Kundra busy with other work’. One wrote, ‘Wife made video of yoga, husband made video of enjoyment’. One user wrote, ‘There is no fault of Raj Kundra. The fault lies with the camera that recorded those films. I send a thousand damns to those cameras. So let’s see what kind of reaction users are giving on this matter…

Police – asking about links for evidence

#RajKundraArrest
Everyone asking for the link

Shilpa Shetty I am happy to give the knowledge of Yoga to the world.

Raj Kundra To Everyone :- pic.twitter.com/lf8T6TQpA0

Businessman Raj Kundra is badly trapped in the charge of making pornographic films. On Monday, the team of Mumbai Crime Branch arrested him. As soon as this news came out, there was uproar. This matter has also heated up on social media and users are busy trolling Raj Kundra-Shilfa Shetty fiercely.

what is the matter

Raj Kundra was questioned by the Mumbai Crime Branch in connection with making obscene films and displaying them through some apps late on Monday night. After several hours of interrogation, Kundra was arrested by the Crime Branch. Crime branch officials had to say about the arrest of Raj Kundra that they have enough evidence against the businessman. Crime Branch believes that Raj Kundra is the main conspirator.

Also read – Woman was celebrating her birthday alone in the restaurant, then everyone will be happy to see what happened