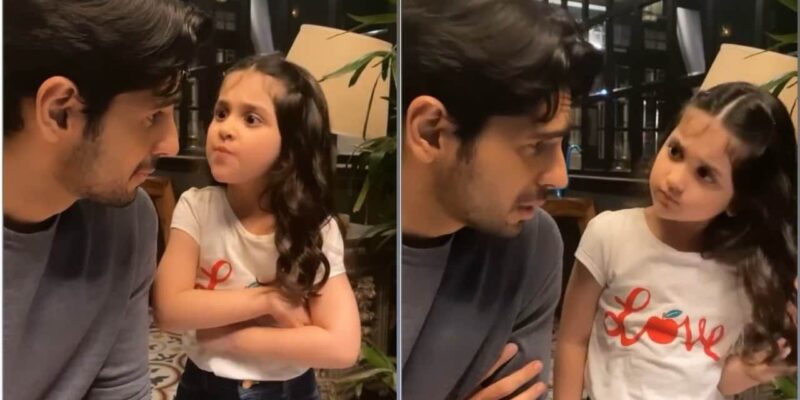 Siddharth Malhotra and Kiara Advani’s film Shershaah has been released some time back. This film is a biopic of martyr Captain Vikram Batra, in which his love story is shown. The love story of Vikram and Dimple has won everyone’s heart. Siddharth Vikram Batra and Kiara Advani are seen in the role of Dimple Cheema in the film. After this film, now Siddharth has got Little Kiara. He himself has given this information.

The dialogues of the film Sher Shah became very famous. A dialogue of Dimple and Vikram’s conversation was very much liked by the fans. On which a girl had made a video which went viral on social media. Now Siddharth Malhotra has met this little one.

Siddharth Malhotra has shared a video on his Instagram account in which he has shown a glimpse of little Kiara to the fans. Fans are not taking their eyes off the videos of Little Kiara and Siddharth. He is watching this video again and again.

Even Kiara Advani could not stop herself from commenting after watching the video of Little Kiara and Siddharth. He posted a heart emoji. One fan wrote- Uff. Ye dil maange peacock. Another fan wrote – Oh how cute.

Let us tell you that Shershahar has proved to be a superhit. This film has been liked a lot. This film was released on the OTT platform in the month of August. Siddharth and Kiara’s chemistry in the film won everyone’s heart.

Siddharth and Kiara have been in the headlines since the film Shershaah. According to the reports, both are dating each other but always avoid talking about it. He has remained silent on his relationship right now.

Also read: Birth Anniversary: ​​Ashok Kumar was an actor as well as an astrologer, had told this truth after seeing Manto’s horoscope

Shatrughan Sinha said on Aryan Khan drugs case, said- the child is being targeted because of Shahrukh

UP Madarsa Syllabus: Now seven subjects including maths and science will be compulsory in madrasas, IT cell will also be formed