RRR Super Success: Are people liking the cocktail of nationalism and Hindutva? 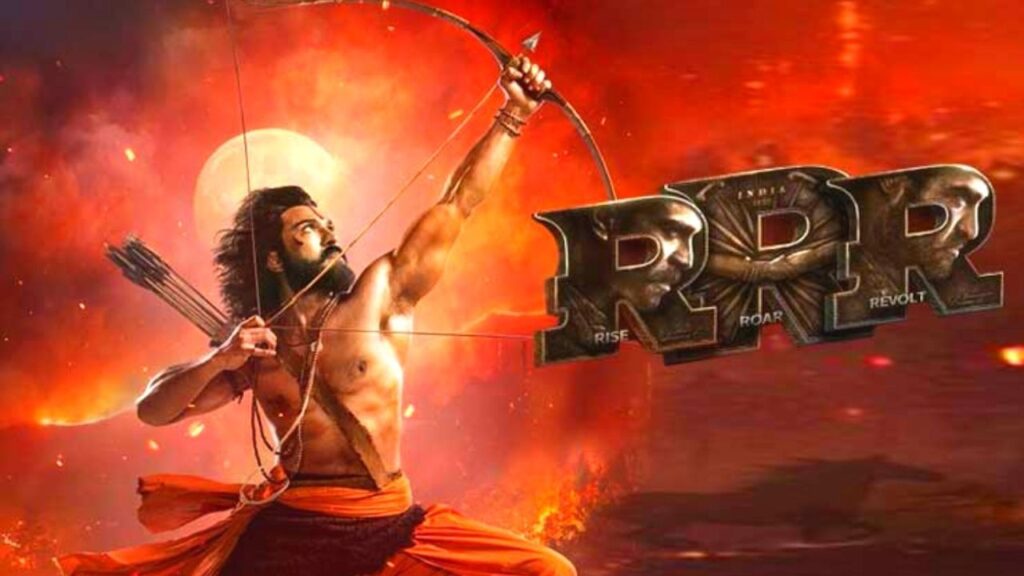 At the end of the film, a song ‘Sholay Sholay’ comes in which the famous faces of the freedom movement are shown. Gandhi-Nehru are missing. Vallabhbhai Patel, Subhash Chandra Bose and Bhagat Singh are visible.

The main protagonist of the film takes a saffron avatar in the climax to destroy the British.

But after Kashmir Files, what will the same people say about RRR which is making a splash in the whole country? Will a filmmaker like Rajamouli also be accused of making his film a hit by working on the agenda of Hindutva? Rajamouli’s latest release film RAR has crossed 500 crores worldwide in the first 3 days itself. Released in many languages ​​in the country, this film is flagging in all languages ​​including Hindi. Let’s see how this film turns into a Rammay.

RRR is a film based on the struggle of freedom fighters, so according to that, a strong stigma of nationalism has been put in the film. On that, the film characters of Hindu religion like Ram-Sita and Bhima in the film are making a strong cocktail of film nationalism and Hindutva. In earlier such films, there was also a Muslim character who would sacrifice for the country while saying ‘Alla Ho Akbar’ to give the message of secularism. Here too there is a Muslim character, but he has to say in a dialogue that he is not a Muslim, he has to live in a Muslim disguise due to a secret mission. So can it be assumed that people are liking the cocktail of nationalism and Hindutva?

In many of his films, Rajamouli has been taking India’s ancient culture and civilization to great heights. Those who have seen both parts of his superhit films Bahubali, Magadheera etc. know that his films evoke a sense of grandeur and superiority for ancient India. RRR is also a period film but the story is not of any royal family as is usually characteristic of Rajamouli’s films. Story line The focus is only on the atrocities of the British on Indians and the revolutionaries who fought them. But the hero comes in the incarnation of Ram in the climax while fighting the British. The name of the main character of the story is also Ram and the name of his fiancée is Sita.

Ram is fighting a huge battle to mobilize arms (guns) for his organization to fight the tyranny of the British. But in the end, calling for the destruction of the tyrants, assumes saffron and destroys the British with the help of arrows and bows. The meaning of saying is that for the destruction of the tyrannical British, this great revolutionary has to take the incarnation of Ram, whereas the fight could have been done with guns and grenades.

But the filmmaker might have shot such a climax, thinking that the audience would probably have more fun in the destruction of the English form of Ravana at the hands of his religious hero with arrows and bows. In this battle he is supported by Bhima, who can be considered as Hanuman’s form of Rama. Who belongs to a tribe living in the forest. In the ancient Ramayana scripture, Hanuman takes Rama’s ring and goes to Sita sitting in Ravana’s captivity. In this film, Bhima takes Sita’s ring and goes to Ram in the captivity of the British. In this way the script of the film becomes Rammay.

The style of films made in Tamil Nadu or Kerala has always been against saffron. Mani Ratnam’s films have been the flag bearers of this kind of subject. Shahrukh starrer Dil Se Rahi or Abhishek Bachchan and Aishwarya starrer Raavan. In Dil Se, where the atrocities of the security forces, especially the army, were told behind the birth of terrorists, in Ravana, Ram was shown with a gray shade. Although both these films were rejected by the audience. Anti-saffron, liberal-minded material has been found in Rajinikanth or Vijay’s films too. Kamal Haasan has also never been behind on such a subject. Although Rajamouli, the creator of RRR, is a Telugu and Hindutva and nationalism have been favorite subjects in Telugu films. In Bahubali and Magadheera, he glorified the great governance system and powerful military system of ancient India. RRR is also the anthem of India’s pride saga on the same lines.

Filled with Vande Mataram and Nationalism

At the end of the film, a song ‘Sholay Sholay’ comes in which the famous faces of the freedom movement are shown. These faces are missing those leaders who have been shown in patriotic films for 50 years after independence. Remember Manoj Kumar’s films like Upkar, Purab Paschim, in which not only Gandhi-Nehru but Indira Gandhi were also seen. But Gandhi-Nehru are missing from RRR. 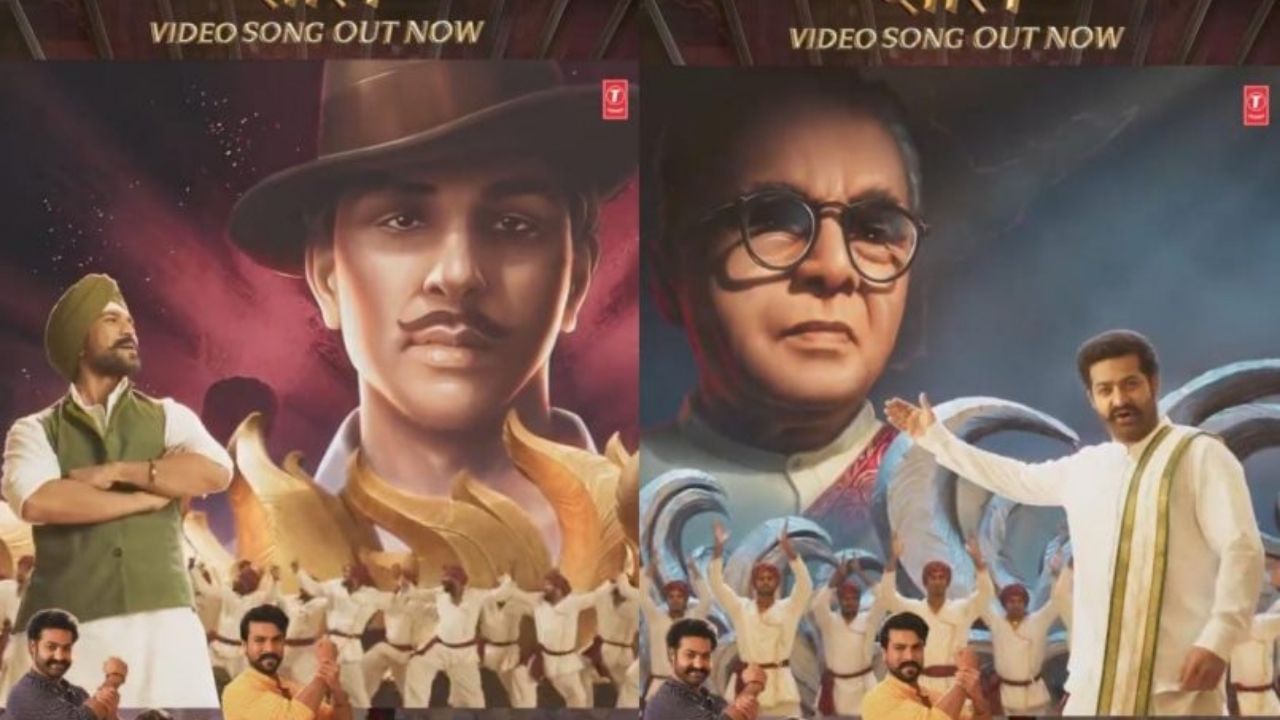 Gandhi-Nehru are missing from the poster.

Vallabhbhai Patel, Subhash Chandra Bose and Bhagat Singh are visible. All the liberals of the country, who were upset after seeing the Kashmir file, would not like to see that this film, released in all languages ​​in the North and South, is giving Pan India acceptance to Ram. The scene of Vande Mataram’s flag being ready in an action scene of the film becomes very thrilling. A flag also shows water-forest-land.

Ram in the South

Rama has never been less popular in the South than in the North. I remember a speech heard by former Prime Minister Atal Bihari Vajpayee in 1984. While listening to him in Gorakhpur’s Barhalganj town, for the first time a feeling of the glory of Ram was awakened in my child’s mind. Vajpayee told in his speech that Ram is going from the north and Ram is coming from the south. He explained in detail that Tamil Nadu CM MG Ramachandran, Karnataka CM Ramakrishna Hegde and Andhra Pradesh CM NT Rama Rao are becoming. Meaning Ramnami people are forming the government in the south.

The speeches of big leaders like Vajpayee had very esoteric far-reaching implications. He also gave the example of Indonesia and Bali while glorifying the name of Ram. We all know that in these three decades, the canvas of Vajpayee’s Ram Roop has become very big. It is also important to know that many other forms of Vishnu such as Tirupati Balaji, Yadadridev Lord Narasimha and many other forms have been worshiped with great faith in South India. Vishnu incarnation Rama is inhabited by the people here, but other forms of Vishnu have been worshiped in popular temples.

Something similar has happened in North India as well. From childhood, we used to go to Taman Hanuman temple and offer offerings to the Hanuman idol located in the main sanctum sanctorum, then in some corner we would bow down while expressing reverence for Rama and Sita. Although when young, seeing Ram family in the center and Hanuman ji in the main sanctum sanctorum of the Hanuman temple in Connaught Place, Delhi, it was definitely heartbreaking to see Hanuman ji on the shore, but despite being on the edge, due to the reverence of the devotees, Hanuman ji is also in the main attraction here. Go. Actually Hanuman is a trouble-maker for the devotees, he is the destroyer of all sorrows. But due to the destruction of Ravana, Ram is living in the people of North India as the destroyer of sinners and tyrants. Perhaps the reason behind this is the staging of Ram Leelas every year in Dussehra and the killing of Ravana making him a symbol of the victory of good over evil. But in the south there would be neither Ram Leela nor a grand celebration of Dussehra every year.

The ‘sin’ of Bitta Karate, a terrorist who killed 20 Kashmiri Pandits, will be accounted for! Hearing in Srinagar court today after 31 years

Death Anniversary: ​​This person had humiliated Anand Bakshi, yet left this film for his sake