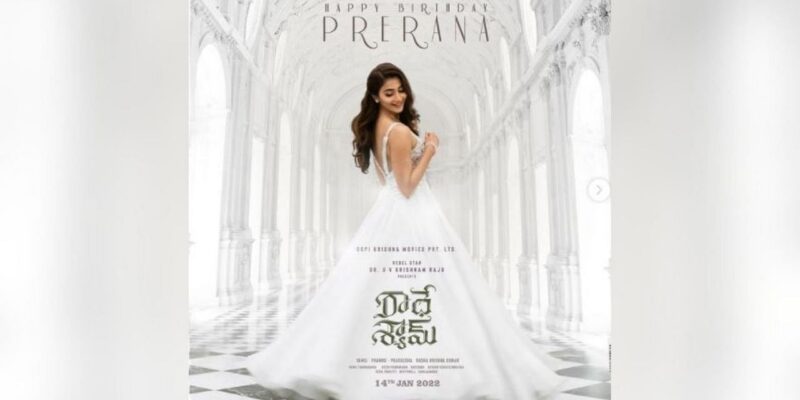 Solo poster of Pooja Hegde from the movie Radhe Shyam.

By the way, everyone wished her on the birthday of Pooja Hegde. But his costar Prabhas in his upcoming film ‘Radhe Shyam’ has wished him with a wonderful gift. Prabhas has launched a solo poster of Pooja Hegde from the film Radhe Shyam on his Instagram handle. Prabhas has written in the caption ‘Happy Birthday’ and tagged him. Although Happy Birthday Prerna is written in the poster. In the poster, Pooja is looking very beautiful in a white gown. The film Radhe Shyam will be released on 14 January 2022.

Pooja Hegde has made a different place in the South film industry. There she is included in the list of successful heroines. He started his acting career with South’s film Mougamoodu. This film was a super duper hit. Pooja Hegde entered Bollywood with the film Mohenjo Daro opposite Hrithik Roshan. However, the film was not as successful on the screen. Today Pooja Hegde is celebrating her 31st birthday.

Pooja is one of the highest paid actresses of South

Pooja Hegde may not have been able to show that amazing in Bollywood. But his magic works in South films. That is why she is one of the highest paid actresses of South Film Industry. According to reports, the net worth of Pooja Hegde is around 51 crores. On the other hand, if we talk about his monthly income, then he is close to 50 lakhs. After Radheshyam, Pooja is soon going to be seen in a film with superstar Mahesh Babu and she has taken a hefty fee of about 2.5 crores for this film.

Only after the announcement of Radhe Shyam, the pair of Pooja Hegde and Prabhas is in the headlines on the internet. Many posters of the film have been revealed so far. Which the fans have liked very much. At the same time, this film of Prabhas Radhe Shyam is going to be the third all-India film after Bahubali series and Saaho. Prabhas is making a comeback in his romantic style through Radheshyam. Actually both Bahubali series and Saaho were action movies, but in Radhe Shyam, the romantic style of Prabhas and Pooja Hegde will be seen. This film is directed by Radha Krishna Kumar.

Prabhas gave a gift to fans on Pooja Hegde’s birthday, shared the new look of the actress from ‘Radhe Shyam’

Railway Recruitment 2021: Thousands of vacancies for 10th pass in railways, no exam, job like this