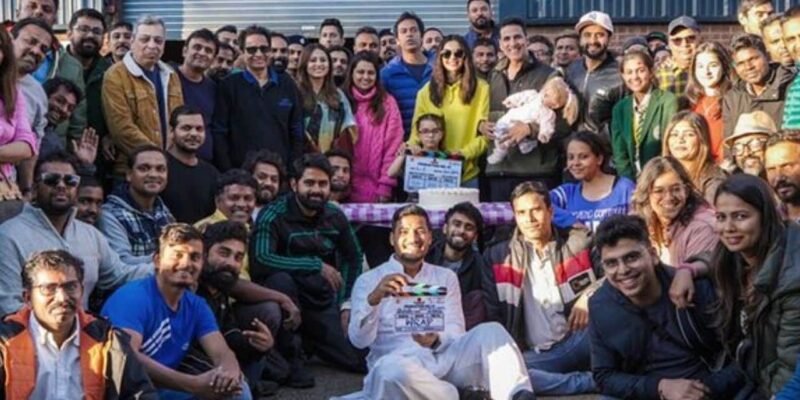 After the huge success of the film ‘Bell Bottom’, Akshay Kumar and director Ranjit have come together once again. The shooting of the first schedule of Pooja Entertainment’s production number 41 has been completed. This shooting was done in London. What is the title of the film, as of now no information has been revealed about it. The makers of ‘Bellbottom’ have once again joined hands with Bollywood action star Akshay Kumar for a thrilling entertainer that also stars Rakul Preet Singh, who will be seen as his lady love in the film.

Akshay Kumar has given information about the completion of the shooting schedule of the film by sharing a photo on his social media handle. Apart from Rakul Preet Singh and Sargun Mehta, the entire team of the film is seen in this photo. Sharing this photo, Akshay Kumar wrote in the caption – Can’t believe that #Production41 has been wrapped. Grateful to shoot and complete a memorable journey with the most lovely team. Thank you for all the love, smiles and fun.

Taking a closer look at the picture shared by Akshay Kumar, you will see smiling faces of the lead stars Akshay and Rakul, producers Vashu Bhagnani, Deepshikha Deshmukh, Jackky Bhagnani, as well as directors Ranjit M Tiwari, Sargun Mehta and the entire team. A baby-like doll will also be seen in Akshay Kumar’s hand, due to which it is being speculated that this film is going to be a lot of entertainment.

At present, talking about Akshay Kumar’s workfront, these days he is waiting for the release of his upcoming film Sooryavanshi. Directed by Rohit Shetty, the film is going to release in theaters on November 5. Apart from this, Akshay Kumar has high budget films like Atrangi Re, Ram Setu and Raksha Bandhan in his account. The shooting of Atrangi Re has been completed. Presently the post-production work of this film is going on. Akshay Kumar will be seen working with Dhanush and Sara Ali Khan for the first time through this film.

‘China’s military gathering in eastern Ladakh is a matter of concern, but India is closely watching every activity’, said Army Chief Naravane