Mallika A Ishq believes ‘best or nothing’, mentioning Amitabh Bachchan several times in ‘Rekha Special Episode’ on the stage of Indian Idol 12

On the stage of Sony TV’s Singing Reality Show, Indian Idol 12, Rekha created a sensation with her impeccable style. In Saturday’s episode, Rekha shared many experiences of her life and a lot of fun with the judges and contestants of Indian Idol. Where there is no mention of Rekha and Amitabh Bachchan, this cannot be done, so on the Indian Idol episode telecasted on Saturday, Amitabh Bachchan was remembered several times for not taking his name.

At the very beginning of the episode, when the show’s host Jai Bhanushali asked Neha Kakkar and Rekha, have you ever seen a woman getting so mad, that too for a married man. Upon hearing Jai’s line, Rekha immediately said, ‘Ask me no’. After listening to Rekha’s answer, everyone was stunned for two moments along with the show’s host Jai. Seeing this reaction of all, Rekha immediately reversed and said, ‘I did not say anything.’

Beautiful people were in front during the song

After listening to Arunita’s song on the stage of Indian Idol, Rekha said, she loves Asha and Lata Mangeshkar the most. Lata Mangeshkar recalls the song ‘Ye Kaun Aaye Hain Hum’ when he was being filmed on her, then the ears of Lata Tai were echoing in her ears and Rekha was very attentive to the beautiful person in front of her. did not go. Let me tell you, this song from the film Silsila has been filmed on Rekha and Amitabh Bachchan.

Heartache is a statement on the Idol stage

Rekha praised Danish Khan’s song but she realized that Danish has some pain in her heart and she can deal well with this pain because she too believes in ‘best or nothing’. Without mentioning it Rekha called Bollywood superstar Amitabh Bachchan the best. Along with this, he presented the song ‘Umrao Jaan Ka’, which had a juju, he has not found it, on the stage. Through these songs, he narrated Rekha’s heartache on the stage of Indian Idol.

The 66-year-old actress was lost on stage by listening to songs from her and Amitabh Bachchan’s films. Danish (Khan) invited Rekha to the stage after her performance and on stage she performed on the song Muqaddar Ka Sikandar with Rekha and other contestants also joined her in it. The way this song was filmed on Amitabh Bachchan, in the same way, Rekha, sitting on the harmonium on the stage of Indian Idol, imitated Amitabh Bachchan riding a bike. 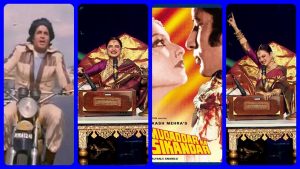 Pics: Sunny Leone set the mood for the weekend party in a halter-neck gown and strappy heels

Indian Idol 12: Rekha stared at Pawandeep Rajan’s impressive performance, stating that this is a big thing