Love Story: Yami Gautam and Aditya Dhar’s love story started during the promotion of ‘Uri’, friends took care of privacy like this 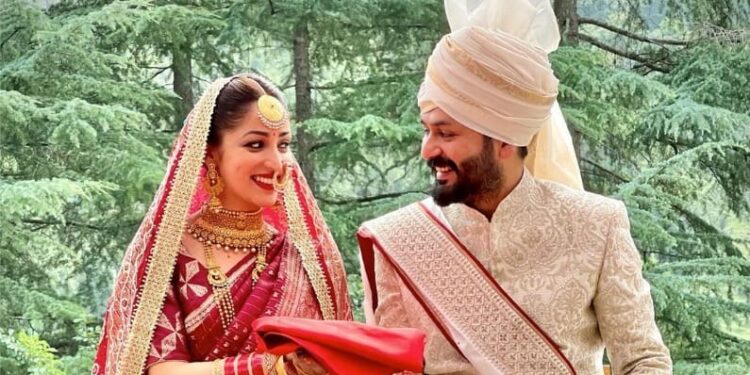 Yami Gautam and Aditya Dhar tied the knot on June 4. He informed the fans about the wedding by sharing the photo on social media.

Bollywood actress Yami Gautam and filmmaker Aditya Dhar have recently tied the knot. Both of them surprised the fans by sharing wedding pictures on social media. Yami and Aditya were married in the actress’s hometown. Only family members attended the wedding. Now Yami has told the fans about her love story.

In a special conversation with Hindustan Times, Yami has told that it was not love at first sight. Earlier we were good friends, after that this relationship turned into love. Yami told that we started dating during the promotion of Uri. We started talking during that time. I would not like to call it dating but this was the time when we started talking and our friendship started.

Yami and Aditya’s relationship started on a professional note. But then this relationship turned into love. When Yami was asked that when did you come to know that Aditya would be your life partner. Talking about this, Yami said that you cannot express it in words. You just get to know. When you start understanding the value system of a person and which family he belongs to. It is not necessary that your interests are the same but the value system should be the same and we both have many similarities. I respect Aditya a lot for being a good person with a professional. I respect him as he is.

Yami further told that before marriage many people and my friends were asking me how are you so calm? Where is your anxiety, stress and nervousness in your voice? But I was happy because I was sure that what I was doing was right. I am lucky that I have got another family in Aditya and his family.

friends had hidden the matter

When Yami was asked that no one knew about their relationship in the industry? So he laughed and said, I think this is not the right time to tell this. I respect my friends a lot. Very few of our common friends took care of our privacy. It means a lot to us. It is good to share this with the media and all friends but only when both of you are comfortable. During that time there should not be any pressure on either of them. You have to decide what is good for you, then do that which makes you happy.

Yami said that nothing has changed about her marriage due to the pandemic. Even if there was no epidemic, we would have married in the same way in which family members are involved. The marriage would have happened at the same place where it has taken place now. We are really like this and our family is very happy. I had already thought that I will wear mother’s sari in my wedding and take that dupatta which was given to me by my grandmother.

Lookalike: He has met Dilip Kumar, his lookalike, eyes were moist after listening to Saira Banu