Khatron Ke Khiladi 11: Madhurima Tuli gets angry on Colors channel, know what is the big reason for this? 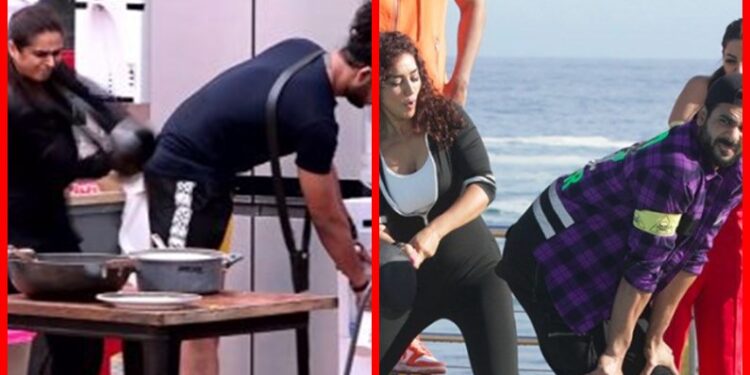 Madhurima has said that the people who abused dirty in the show have come to your (Colors TV) show and host it. Why don’t you talk like this with them.’

The makers of reality shows do everything possible to make their content interesting and entertaining. In the recently premiered Khatron Ke Khiladi season 11, Vishal Aditya Singh got a lot of leg pulled by the show’s judge Rohit Shetty over the fight between him and Madhurima Tuli in Bigg Boss. Not only this, Vishal and Mehak Chahal recreated Bigg Boss 13’s ‘Attack on Vishal with a frying pan’ again in South Africa. Although all this joke was done in fun, but now actress Madhurima Tuli has objected to this entire scene and Colors TV has repeatedly mentioned this incident.

In the video posted on her social media, Madhurima Tuli is seen pleading with folded hands to the channel. In her video, Madhurima says that this message is for Colors channel, Dear Colors channel To be honest, I did not want to make this video. But I have to make this video out of compulsion. Because now I can’t tolerate it anymore. I have done many shows with you. I have done Chandrakanta with you, I have done 24 and Bigg Boss. I had a lot of fun doing all the shows. But because of one thing, I am very sad that you are dragging only one incident.

Many things happened in that house

Madhurima further says that you are mentioning the same thing again and again for your game for your TRP, you do not care what effect it is having on the family of others. What is happening in their life, how depressed are those people. Those people want to forget this thing but you are not letting them forget this thing. Other things happened in the same house, like throwing hot tea, punching, abusing, abusing, but no one is repeating that thing.

Being mocked for not having many fans

Further Madhurima has said that the people who abused the dirty dirty in the show have come to your (Colors TV) show and host it. Why don’t you talk to him like throwing tea and many other things that happened in Bigg Boss house. Then it will feel like a balance that you are joking with everyone like this. No one is being targeted. You are doing all this with me probably because my fan following is not so much, no one will stand for me and the matter will be buried here.

Regarding this whole incident, the Chandrakanta actress says that ‘You are causing great pain to me, my family and everyone.’ Finally, with folded hands, Madhurima has also requested Colors TV, ‘You should not repeatedly show this thing i.e. Vishal Aditya Singh and his pan fight. I have done a lot of good work, I have done it with you. I don’t want people to remember me for the wrong thing. Many things happened in that house, if you want to repeat it, then repeat it in all those things.

Balika Vadhu 2 Trailer: Daughter-in-law is born, not a daughter… New Anandi faced the curse of child marriage in her mother’s womb