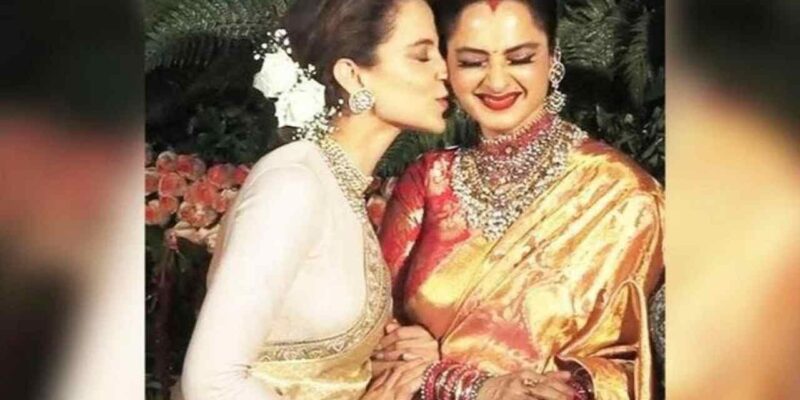 Bollywood’s beautiful and unsurpassed actress Rekha Birthday is celebrating her birthday today. Every one of her fans is congratulating Rekha on this special occasion. From the fans of the actress to Bollywood celebs are included in this list. In such a situation, Bollywood actress Kangana Ranaut has also congratulated Rekha on her birthday.

Kangana, who has always presented herself in a different style, has congratulated Rekha on her birthday in a special way. Let us tell you that Kangana has shared a great picture with Rekha on her Instagram story and has called her her ‘godmother’.

In the photo shared by Kangana with Rekha, the actress is seen wearing an orange silk saree. While Kangana is also seen in a special style in the saree itself. Sharing this picture, Kangana wrote in the caption, “Happy birthday to my godmother Rekha… the epitome of grace, elegance and beauty.”

Fans are very fond of this special way of wishing Rekha by Kangana. It is being speculated that this cute photo with Rekha and Kangana is from the wedding reception of Virat Kohli and Anushka Sharma. At present, this photo has become popular among the fans of both the actresses.

Let us tell you that Kangana and Rekha have been seen praising each other many times. During the Marathi Taraka Awards, Rekha had said that if she had a daughter, she would have been like Kangana. This statement of Rekha was very much liked. Rekha worked in countless films from Utsav to Umraavaan, for which the actress still receives a lot of accolades. By the way, Rekha started her career as a child actress in the Telugu films Inti Guttu (1958) and Rangula Ratnam (1966). She was in the form, but she made her debut in Bollywood with the film Sawan Bhadon (1970), after which Rekha never looked back.

Also read- Rakul Preet Singh seals her relationship with Jackky Bhagnani, gifted her fans in a romantic way on her birthday

Photos: Rakul Preet Singh is celebrating birthday with her family and friends, from Sidharth Malhotra to Riteish Deshmukh, celebs reached the party

Women were the most victims of mental problems in the corona epidemic, a big reason for confusion in home and office work