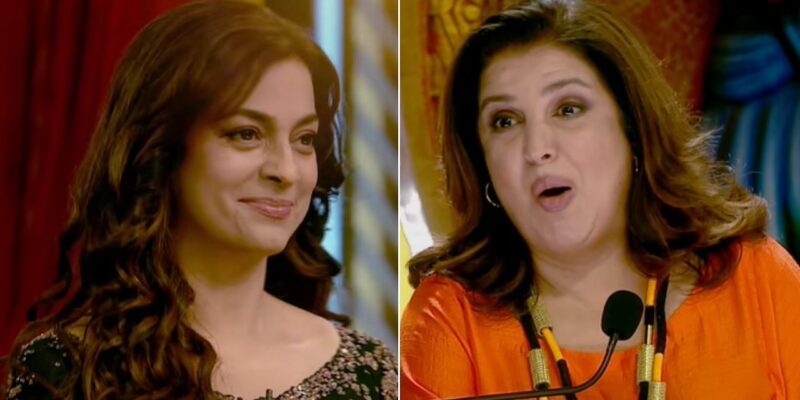 Farah Khan has made Juhi Chawla dance on her gestures in many songs. Both are very good friends and also share a good bond with each other. Both do not hold back from pulling each other’s legs.

Bollywood actress Juhi Chawla and industry’s well-known choreographer and filmmaker Farah Khan recently appeared on ‘Zee Comedy Show’. Juhi appeared as a special guest of the show on this weekend, while Farah Khan was seen playing the role of ‘Laughing Buddha’ in the show. During this, Juhi Chawla has reminisced about the days when she got a ‘slap’ from choreographer-filmmaker Farah Khan along with others on the sets of her film and how everyone was scared of her.

On the show, Juhi said, “I have seen Zee comedy shows before and also how Farah slaps all the comedians with a lot of love, but when we used to work with her, we got a ‘slap’ almost daily. used to get it.” She added, “Sometimes, she would come on the sets and everyone would be working hard and rehearsing, but she might not like what we were doing, so she would take the mic in front of the whole unit. And shouted, ‘What the hell is this? What the hell are you all doing?’ We used to get scared.”

Hearing Juhi’s words, everyone present on the set started laughing. At the same time, reacting to Juhi’s talk, Farah commented, “Those days they were really bullshit, whatever they are doing, but we have done many great songs together and we have had a fair amount of fun too. Juhi is one of the most talented actresses and dancers I know and I have had a great time working with her.”

Not only this, Juhi Chawla also talked about her first meeting with her husband Jai Mehta during the show. In the show, comedian Gaurav Dubey sings Juhi Chawla’s famous song ‘Mumbai Se Gayi Poona, Poona Se Gayi Delhi, Delhi Se Gayi Patna’ from Juhi Chawla’s film ‘Hum Hain Rahi Pyaar Ke’. During this song, Gaurav asks Juhi if Gujarat has come somewhere in the middle, then how did you and Jai Mehta meet? On this matter of Gaurav, Juhi says in a funny way that they got it by mistake. Hearing these things of Juhi, everyone present there started laughing.

Also read- Birthday Special: Chunky Pandey got a break in Bollywood because of the pajamas, read – what is the whole matter?