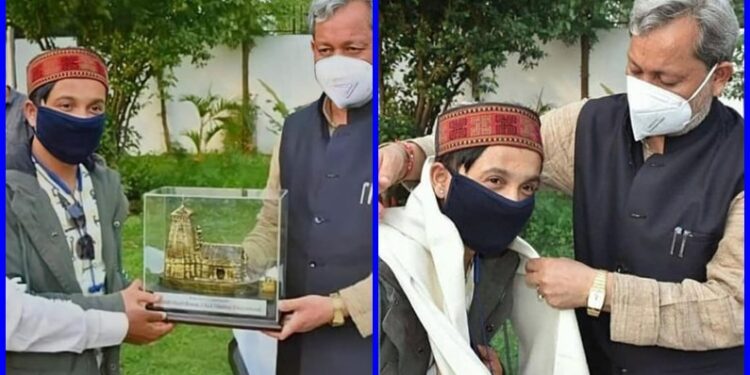 Pawandeep Rajan has got a lot of love from the people of Uttarakhand. From the very beginning, his style of singing and his talent for playing different types of musical instruments are well-liked by all.

Popular Contestant of Sony TV’s Singing Reality Show Indian Idol 12, Pawandeep Rajan took time out from his busy shooting and went to his home in Champawat, Uttarakhand. Huh. After returning home, Pawandeep, who made his state famous all over the world, also got an opportunity to meet Uttarakhand Chief Minister Tirath Singh Rawat. For his further journey of Idol, he took the blessings of the Chief Minister of his state and he was also given a shawl by the CM.

On getting the honor himself, Pawandeep Rajan said, “I am very happy to meet our Uttarakhand CM. The platform of Indian Idol 12 has actually delivered more than what I imagined. It is one of the most prestigious platforms in the country, which gives so much respect to its contestants. I will always be thankful to people for the love they have shown towards me along with popularity and respect. This moment of meeting CM Tirath Singh Rawat is very special for me and he will remain in my memories forever.”

got break due to bank episode

In fact, for the last two months, the team of Indian Idol was shooting in the bio bubble in Daman. Because of this, he has not got a chance to meet his family. Now after getting permission to shoot in Maharashtra, the entire team of Idol has returned to Mumbai. However, due to the team of Indian Idol 12 shooting back to back two episodes in a day, they have almost a month’s bank episodes ahead. Because of this, the contestants have also got a break from shooting and practice and taking advantage of this, they have returned to their homes for some time. After his return to the set, his corona test will be done again and the shoot will start in the bio bubble.

Famous singer of Uttarakhand is Pawandeep

Before joining Indian Idol, Pawandeep was very famous in Uttarakhand. His father is also a popular singer there. Before Idol, he also won one more reality show.