Indian Idol 12 : Karisma Kapoor became a fan of Sayali Kamble’s tunes, both of them danced together on the song ‘Le Gayi Le Gayi’ 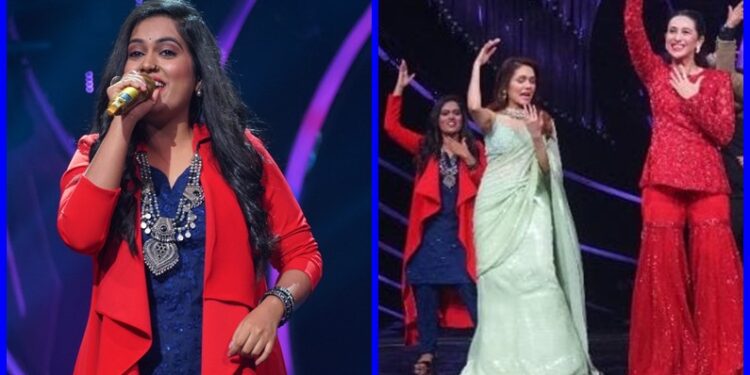 Karisma Kapoor immediately accepted the request of her fan and Indian Idol 12 contestant Sayli Kamble and she agreed to dance with him.

Sony TV’s Singing Reality Show ‘Indian Idol 12’ is set to witness a tremendous burst of entertainment and drama this week with Bollywood queen Karisma Kapoor of the 90s. Huh. This episode will be very special for Idol Contestant Sayli Kamble as she is going to get a lot of applause from the Expression Queen of Bollywood on this special occasion. Sayali will be in awe of the applause she has received from her favorite actress.

In this special episode named after Karisma Kapoor, the audience will get to see more than one spectacular performance of the top 6 contestants of Indian Idol 12. During this, India’s daughter Saylee Kamble will be seen performing on songs like ‘Le Gayi Le Gayi’ and ‘Main Albeli’. After this performance of Sayali, Karisma Kapoor is going to give her a standing ovation. Not only this, after her passionate performance, Sayali will also request her favorite actress Karisma Kapoor to come on stage with her and dance on the song ‘Le Gayi Le Gayi’.

Everyone danced together with Karishma

This request of Sayali will be accepted by Karishma immediately. Shanmukhpriya and Arunita Kanjilal along with all the other contestants and judges Anu Malik, Sonu Kakkar and Himesh Reshammiya also joined Karisma Kapoor and Sayali on stage. Together, they will be seen performing a fun dance on the songs ‘Le Gayi Le Gayi’ from the film ‘Dil To Pagal Hai’. Let us tell you, Karisma Kapoor, Shahrukh Khan and Madhuri Dixit worked together in this film.

Know what Sayali has to say

Recalling this funny moment spent with the darling ‘Lolo’ of the film industry, Sayly Kamble said, “I had a great time with Karishma ma’am. I grew up watching his movies and because of Indian Idol, I got a chance to meet him and dance with him on his famous songs. ‘Le Gayi Le Gayi’ is my favorite song. It was a magical evening for me.”

Hina Khan started her new innings, the fans of the film ‘Lines’ got a glimpse, watch the video