Indian Idol 12: Dharmendra and Anita Raj will be part of the music festival, watch the video of Shanmukhpriya, Pawandeep and Danish’s performance 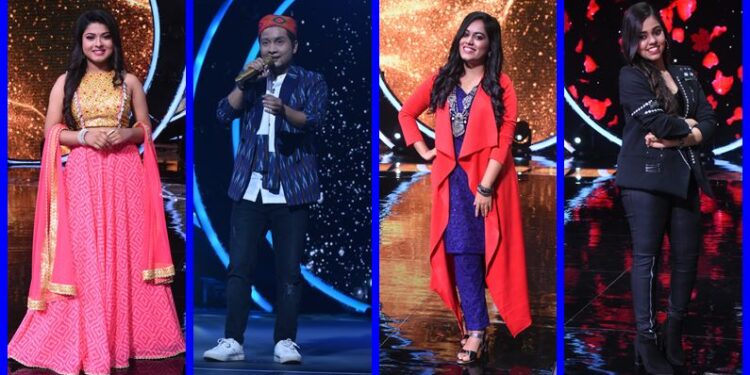 On the stage of Indian Idol 12, today the top 6 contestants are going to be seen presenting the famous songs of 80s superhit duo Dharmendra and Anita Raaj on the stage.

Dharmendra and Anita Raj will be part of the music festival

In today’s episode of Sony TV’s Singing Reality Show Indian Idol 12, Bollywood’s Legendary Actor Dharmendra is going to come once again. But this time along with Dharmendra, veteran superstar Anita Raj will also join the show. The theme of this special episode has been kept as ‘Dharmendra and Anita Raj Special’. The top 6 contestants of Idol will be seen performing in front of these two biggies of Bollywood. So let’s take a look at some of the performances that will be presented on the Indian Idol 12 stage today.

Contestant Sayli Kamble is going to present the song ‘Ab Ke Sajan Sawan Mein’ on the stage of Idol. Seeing this performance of Sayali, Dharmendra and Anita Raj will praise her a lot. Dharmendra will tell them that in this performance, there was flexibility as well as thumping. And when Khanak and Lachak come together, then that music has a different style of its own. The way Saylee has gone at it, it looks like I should hug her and bless her.

Idol’s famous contestant Pawandeep Rajan, Dharmendra will be seen praising Pawandeep a lot after listening to this song ‘Lon se chhu lo tum, Mera Geet amar kar do’. He will say that ‘Your voice is amazing and your talent is also tremendous. I have heard your songs before. Dharmendra is also going to give a special gift to Pawandeep for performing this song on the stage of Idol.

Contestant Shanmukhpriya will be seen presenting the song ‘Mera Pyaar Shalimar, Tera Pyar Shalimar’ in a different style in front of this famous 80s couple Dharmendra and Anita Raj today. Seeing his performance, Dharmendra will be blown away by his voice. He will say that listening to this song, he sees only crazy, crazy, crazy. So the show’s judge Sonu Kakkar will praise Shanmukhpriya for this splendid performance and say that someone should learn from Shanmukhpriya to play with notes.

Idol’s Contestant Danish Khan is about to sing the song ‘Sunai Hai Hai Ki Dhadak, Tumhaar Dil Ya Hamara Dil Hai’ on the stage. Listening to his song, Anita Raj will praise him and say that he has performed this song in a very spectacular way.

Special Wish: Akshay Kumar wished Bhumi in a special way, Kriti Sanon could not stop herself from commenting after seeing the post