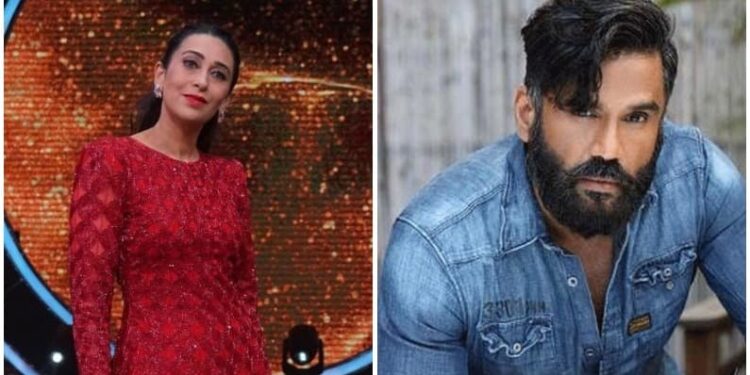 Karisma Kapoor is going to appear in the upcoming episode of Indian Idol 12 and during this time she is going to make some revelations about the industry and her co-stars.

The Queen of the 90s and Bollywood beauty Karisma Kapoor will be welcomed in the upcoming weekend episode of Sony Entertainment Television’s Indian Idol season 12. While the top 6 contestants will impress Karisma with her singing skills, the actress, on the other hand, will be seen revealing fun and interesting moments from her time in the industry. During a fun discussion with host Aditya Narayan, Karisma revealed that Suniel Shetty, Akshay Kumar and Aamir Khan are the biggest clowns.

Although Suniel Shetty was at the top of his list, because he pranked Karisma twice. Karisma told about the prank, ‘We were shooting a film in Chennai, and I saw a man wearing a dhoti sitting at a distance. A lot of people had come over there, so I thought he must be some senior artist from the South, whom I don’t know. Later, Anna (Sunil Shetty) asked me to meet him. We clicked pictures together and talked for about 20 minutes. Later, before the shot, the same man was applying makeup to my face, and I was shocked. I immediately went to Sunil to inquire about her and when he told that it was a prank, I was shocked. That person was actually her own makeup artist. It was a very funny moment at which we all laughed a lot.

once again did a prank

Karishma further explains, ‘The second time it happened that during an action sequence, two men were coming towards each other with daggers. In no time they started fighting. I was so scared that I asked the police or the unit to call someone to stop the fight. When I really got tears in my eyes, Sunil revealed that it was a prank. So yes, Suniel Shetty is the biggest prankster.

Let us tell you that Karishma and Sunil have worked together in films like Krishna, Rakshak, Gopi-Kishan, Saput and Baaz. The onscreen chemistry of Sunil and Karishma was very much liked by the fans. At present, Karishma is away from films for a long time. She was last seen as a lead actress in the 2012 film Dangerous Ishq. After this, in the year 2013, she appeared in a special song of Bombay Times and then in the year 2018 Karishma had a cameo in the film Zero.

However, last year itself, Karishma made her debut on the OTT platform with the web series Mentalhood.

read this also- What is the big plan for ‘Outsiders’ in Bollywood, Taapsee Pannu will give a chance as a producer