How much do people miss Sushant Singh Rajput, Kushal Tandon gave proof by sharing the video

Kushal Tandon has been in Udaipur for the last few days and he is sharing a lot of pictures and videos of his family’s trip to Udaipur with his family members.

Vidyut gave the gift to the fans on completion of 10 years in cinema, will give new talent a chance to work through the production house

Television actor Kushal Tandon was seen by fans in Big Boss. Kushal was also seen confronting Salman Khan in the show. Kushal and Gauhar Khan’s love also started from Bigg Boss. The actor has worked in many serials. Now these days Kushal are roaming in Udaipur. In such a situation, the actor has remembered the late actor Sushant Singh Rajput in a different way here.

Kushal has been in Udaipur for the last few days and is sharing a lot of pictures and videos from his family’s visit to Udaipur. He arrived here on the occasion of his birthday. Meanwhile, the actor has shared a special post.

The actor thanked his fans, family and friends for making his birthday special through social media posts. Now Kushal Tandon has shared the post of his Instagram story and shared some videos of the music performance in the hotel.

He posted a video of Sushant Singh Rajput’s song, and wrote that this Ankita Lokhande for you, our angel friend. In this video shared by Kushal Tandon, a man is seen playing some tunes on his flute. In one of the video clips, ‘Kaun Tujh’ is also seen in Sushant Singh Rajput’s film MS Dhoni: The Untold Story.

While sharing the video, he tagged Ankita Lokhande and wrote, “@lokhandeankita that u for our angel friend.” Ankita Lokhande shared Kushal’s story, and replied with ‘Awwwwww’. One more thing is becoming clear from this video, even today, people are missing Sushant’s memory. This video is being liked a lot on social media. 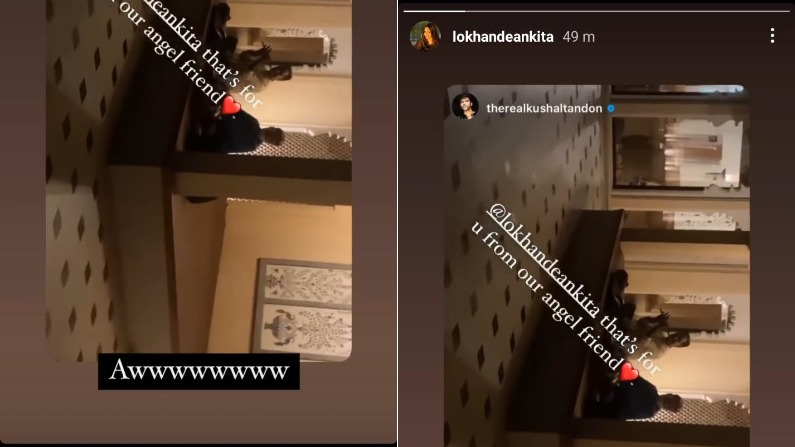 Ankita Lokhande and Sushant Singh Rajput met on the set of Pavitra Rishta, where they fell in love. Both of them openly accepted their love. After being in a relationship for almost six years, both of them were shocked when they separated from each other.

In a recent interview with Bollywood Bubble, Ankita Lokhande blamed Sushant Singh Rajput for breaking up the relationship. He said that I am not blaming anyone Sushant made his choice very clear, he wanted to move forward with his career. He chose his career, and he moved on. CBI is investigating the death of Sushant Singh.