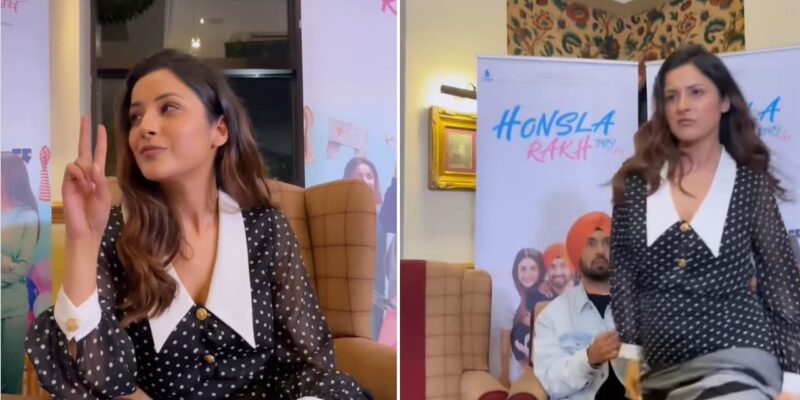 Shehnaaz Gill is trying to overcome the grief of the death of actor Siddharth Shukla. He has now returned to work. His fans are getting very happy seeing Shahnaz back at work. Shahnaz’s Punjabi film Hounsla Rakh is going to release on October 15. Which is being promoted by Shahnaz.

Diljit Dosanjh and Sonam Bajwa are going to be seen in lead roles along with Shahnaz in Hounsala Rakh. All three are currently promoting their film in London. Shahnaz left for London on 7 October for her work. Recently a video of Shahnaz surfaced. Now another video has been shared by Diljit.

Shehnaaz is trying to be happy to promote the film but that charm is not visible in her smile. There is sadness in his eyes.

Fans are getting very happy seeing Shahnaz in the video, they are commenting in support of Shahnaz. A fan wrote – Lots of love and best of luck Shahnaz. At the same time, another fan wrote – Brave girl. More than 3 lakh people have liked this video.

Many pictures and videos of the promotion of the film are going viral on social media. In which Shahnaz is seen. His fans are happy that he is able to see Shahnaz after so long, while some are getting worried seeing his condition. He is giving his love and support to the fans on social media.

Talking about the film, it is being released in theaters on the occasion of Dussehra. Singer Gippy Grewal’s son is also going to be seen in the film along with Diljit, Shahnaz and Sonam. The trailer of the film and 2 songs have also been released.

Bigg Boss 15: While talking to the contestants, Salman Khan took the name of Raj Kundra, Shamita Shetty was surprised to hear

Beauty Tips: To avoid skin infection, use glycerin in this way