Harshvardhan Rane to help people in difficult times, is selling his bike for this noble cause

Harshvardhan Rane has shared a picture while cleaning the bike on his Instagram story. While sharing the photo, he wrote – I am giving my motorcycle at the exchange of oxygen concentration.

Indian Idol 12: These contestants including Ashish and Pawandeep will sing Kishore Kumar’s songs, watch the video

The second wave of the Corona epidemic is becoming dangerous. Millions of people are coming in the grip of this virus every day and thousands of people are dying. Due to lack of oxygen in the country, many countries have come forward to help. Not only this, many Bollywood celebs are also helping. Bollywood actor Harshvardhan Rane has decided to sell his bike to raise funds for oxygen supply. He has given information about this by sharing a picture of his bike on social media.

Harshvardhan has shared a picture while cleaning the bike on his Instagram story. While sharing the photo, he wrote – I am giving my motorcycle at the exchange of oxygen concentration. Whose money will go to any needy. Please help me to find a good concentration in Hyderabad. 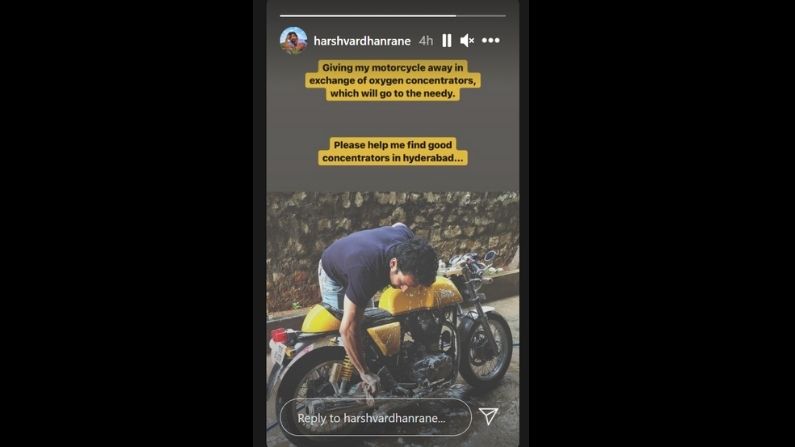 Harshvardhan Sanam is known for films like Teri Kasam and Paltan. He was last seen in Bejoy Namambiar’s film Taish which was released on G5. It is also a web series with the film. He was infected with coronavirus last year and was admitted to the ICU when he was dubbing for Taish.

In an interview with Hindustan Times, Harsh Vardhan shared his experience of dubbing from the hospital. He was seen playing his co-star Pulkit Samrat, Kriti Kharbanda, Jim Sarab and Sanjeeda Sheikh in important roles alongside Bijoy. Harshvardhan said- When you see that when these people give 2000 percent of their money to me, it is my duty to dub from ICU.

Harshvardhan further said – The sound team had done a lot of work to make this professional. I feel bad that the film was delayed because of me, but I think the whole team came forward and gave their best.

Talking about the workfront, Harshvardhan will soon be seen in the film being produced by John Abraham. While telling about the film, John had told PTI- We have started a new film Tara vs Bilal. We are producing it. This is a film inspired by a beautiful life. In this film, Harshvardhan Rane and Angira Dhar will be seen in lead roles. The shooting of this film will begin in May. Summer Sheikh is directing this.

Also Read: Indian Idol 12 Update 1st May 2021 Arunita, Anjali and Top 9 contestants to clash with each other today, watch video

Nikki Tamboli’s brother is fighting a battle with Corona, the actress worships for her well-being at home