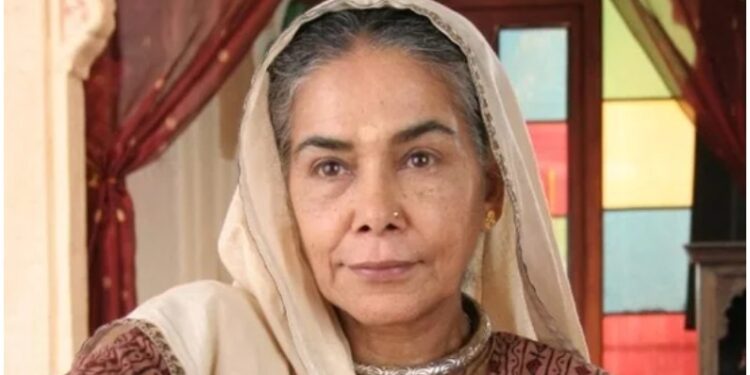 Celebs from Bollywood to TV are in shock due to the death of Surekha Sikri. Everyone is getting emotional remembering his work on social media.

Surekha Sikri, who ruled everyone’s hearts with the character of Dadi Sa in TV’s popular show Balika Vadhu, died on Friday morning. The entire entertainment industry is in mourning due to the death of the actress. On social media, everyone has paid tribute to Surekha Sikri by sharing her photo.

From Bollywood to TV celebs, everyone is remembering Surekha Sikre’s stellar performance and they say that she will always be alive in everyone’s heart through her characters and performances.

Read the reactions of celebs

Pooja Bhatt tweeted, Surekha ji was a force of nature, so instead of rest in peace for her, we should write Rage in Peace like you did here on earth.

She was a force of nature if ever there was one. Hence I won’t say rest in peace but RAGE in peace Surekhaji. As you did,during your time on earth! 🙏🙏🙏 https://t.co/fg79qdGb7U

Nimrat Kaur wrote, You were an institution for all of us. Rest in Power Surekha G.

Such a stalwart, legend, an institution in herself. May her brilliance and shine break barriers in the journey ahead….🖤 Rest in power Surekhaji…… pic.twitter.com/hELiShpUvv

Randeep Hooda shared the photo of Surekha Sikri’s youth and her character of Badhaai Ho and wrote, Rest in Peace Surekha ji.

Manoj Bajpayee wrote, Very bad news. Surekha ji has left all of us. He has done a wonderful job in theater and cinema. It was a pleasure to watch him perform on stage. Can never forget some of his acts.

Very Sad news !!! One of the greatest talent Surekha Sikari ji passed away leaving behind so many great performances in theatre and cinema!! She was a treat to watch on stage.can’t forget some of those memories of her act in theatre.great craft and a graceful person!! RIP🙏🙏

TV actor Anirudh Dave wrote, Every role, every character, every scene in which you performed was a masterpiece. I salute you wholeheartedly.

Every role.Every character. Every scene you played as masterpiece.Loss of another amazing actor RIP #SurekhaSikri ji. A whole lot of respect pic.twitter.com/y1tk85joPe

TV actress Akanksha Puri wrote, Surekha ji has left all of us this morning. We have lost a great actor. You will always be in our heart.

Surekha Sikri Ji passed away due to cardiac arrest this morning 😕 I have been a huge fan of her work and love all her performance totally ! We lost of the finest actors ☹️ What a huge loss!! My condolences to the entire family 🙏 R.I.P #surekhaji You will be remembered always 🙏 pic.twitter.com/g6gWdLz3jf

Surekha’s manager told that this morning the veteran actress has left all of us. Surekha has died due to a heart attack. The family was with him during the last days of Surekha.

Please tell that Surekha Sikri used to work despite illness. She was last seen in Ghost Stories in the year 2020. In this, Jhanvi Kapoor was in the lead role along with Surekha.

Surekha had worked in many TV shows and films, but she became popular from house to house with her character Dadi Sa in the show Balika Vadhu. His character was well-liked by the audience.

read this also- Kareena Kapoor Khan said – I was not a perfect mother before, Taimur did not even know how to wear diapers