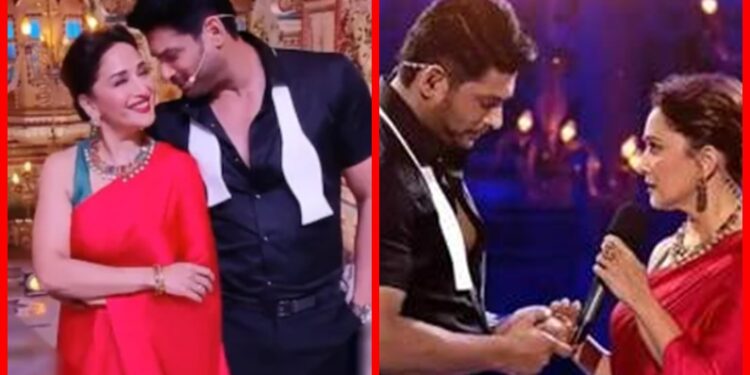 This week in Colors TV’s reality show Dance Deewane 3, Siddharth Shukla will be seen romancing Madhuri Dixit. In the shared video of the channel, we can see that Bigg Boss 13 winner Siddharth Shukla, who came to promote his web series Broken and Beautiful 3, shared his heart with the show’s judge Madhuri Dixit. So have tried to recreate a scene of Pagal Hai (Dil To Pagal Hai). This video of Siddharth and Madhuri is becoming increasingly viral. The chemistry of both of them is winning everyone’s heart.

Let us tell you, this scene of the film ‘Dil To Pagal Hai’ was filmed between Rahul and Pooja. In which Madhuri Dixit, who played the role of Rahul, became Pooja to Shahrukh Khan, is saying that Rahul, have you seen my bangle? With a bangle in his hand, Rahul tells Pooja to come here and take it. After hearing this, Pooja, showing false anger, tells him Rahul but Rahul does not agree, he asks Pooja to come ‘more close’ again and again. Madhuri Dixit was once again playing the role of Pooja on the stage of Dance Deewane but Rahul became Siddharth Shukla, not Shahrukh Khan.

What will be Shahnaz’s reaction

The chemistry of Madhuri Dixit, who flaunts her beauty in a red sari and Siddharth Shukla, who looks dapper in a black shirt, is also seen giving competition to the chemistry of Sidnaaz. Now it will be interesting to see the reaction of Shehnaaz Gill after watching this video of her.

Vicky Kaushal got a new haircut, shared the photo and said – don’t cut your hair, hey….

Timeless: Dimple Kapadia was in love with which superstar, whom she used to call secretly