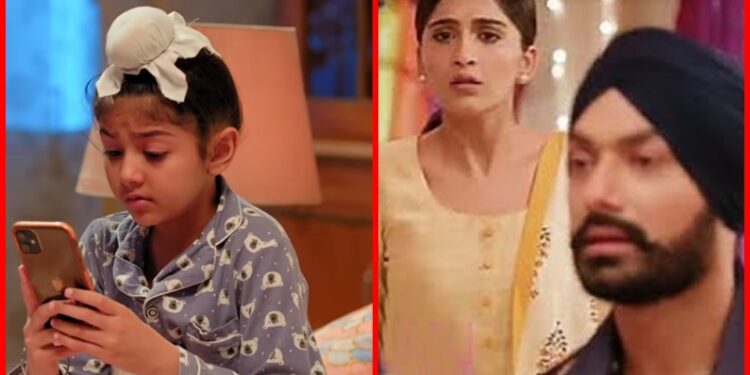 In Choti Sardarni, Karan has seen every wrong deed with his own eyes, but his parents are not ready to listen to him at all.

Meher and Sarabjit will be shocked

Karan, son of Meher and Sarabjeet, is already scared of Taiji’s antics in Colors TV’s serial Chhoti Sardarni. However, Meher and Sarabjit have not been able to recognize Taiji’s real face till now. Soon we will see that Karan along with Geeta will leave his mother’s father’s house and come to Nani. Sarabjit and Meher will get upset as Karan leaves the house without informing them and will start looking for him everywhere.

Till now we have seen in Choti Sardarni, Kulwant sends Geeta to Mansion. Going there, Geeta sends Kulwant a video of Param getting electrocuted, which makes Kulwant happy. Then Bittu asks her “What will you do with it?” Kulwant then tells her that “I will send this video to Meher at the right time and she will be sure that Taiji has done all this”. On the other hand Meher, troubled by the troubles faced by her children, asks the children about the whole incident, Param says that “It is good that Meher Mamma Karan did not get into the water or else he too would have been electrocuted”.

On the other hand, Karan goes to Meher’s room to sleep, then Sehar asks Karan the reason behind his doing such a thing, then Karan tells Sehar that only Mehr Maa trusts him in this house. On the other hand, Sarab asks Meher that how can you imagine that Karan did all this to Param? Meher says that maybe Karan did this to get her attention or maybe in anger. Karan gets sad hearing Meher’s words and leaves from there. Sarab tells Meher that my son will not do it with his brother and I have full faith in your upbringing.

Karan tells his maternal grandmother Kulwant about Meher’s suspicions and starts crying, Kulwant provokes him and says that I trust you completely. Kulwant tells Karan that Meher and Sarab think she is insane, so they both took her to the hospital.

On the other hand, Tai ji i.e. Amrit packs her clothes to leave the house but Harleen and Dolly try to stop them. Tai ji tells them that Sarab has doubts about her so she can’t bear all this anymore, so she doesn’t want to stay here anymore. Darji says that we cannot go till 25th death anniversary of Gurbaksh and if we leave now then Gurbaksh’s soul will not forgive us and Sarab must have said in anger to you, Tai ji starts crying after listening to Dar ji. .

Meher asks Param and Sehar to sleep with Sarab and she goes to sleep with Karan but Karan thinks Mehr Mamma will take me to the doctor again. Then Karan remembers that his maternal grandmother Kulwant had asked him to leave the house without informing anyone. Fearing the doctor, Karan decides that he will leave the house.