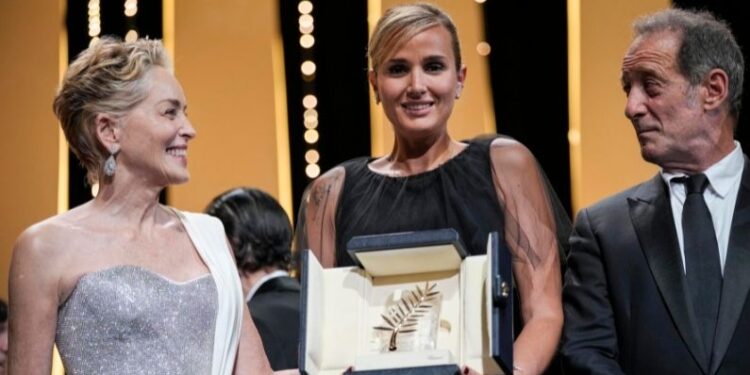 French film director Julia Ducournau has been awarded the Palm d’Or award at the Cannes Film Festival for her film Titan, making her the first female director to win the award in 28 years. The selection for the awards at this film festival was done by a jury headed by Spike Lee. The awards were presented at the closing ceremony of the 74th Cannes Film Festival at the Grand Theater Lumire on Saturday. For the first time in the history of the film festival, the main international competition jury had more women than men.

Dukornu is the second female director ever to win the Palm d’Or award. Earlier, New Zealand’s Jane Kempion was awarded the Palm d’Or in 1993 for ‘The Piano’. At the same time, two films were selected for the ‘Grand Prix’, which is considered to be the second place award in the festival. It was given to Iranian film director Asghar Farhadi’s ‘A Hero’ and Finland’s Juho Kuosamen’s ‘Compartment No. 6’.

At the same time, Leos Karaks was given the award for Best Director for ‘Annet’. The Best Actor award went to Caleb Landry for ‘Nitrum’, while the Best Actress award went to Rinette Reinsway.

What is Cannes Film Festival

To be held in Cannes city of France, it is called the Maha Kumbh of films. Filmmakers and stars from all over the world participate in this film festival. Where his films are shown and later through the jury, the best films and artists are awarded. It can be considered like an Oscar award. The Oscar Awards are often in the midst of controversies, but for the time being the Cannes Film Festival has remained untouched by controversies as the films screened in it are mostly out of commercial cinema. The Cannes Film Festival stays away from controversies due to being mostly art form films and also being away from the common man’s understanding. This year the festival began on 6 July and ended with the announcements of the awards on 17 July.

Happy Birthday Priyanka Chopra: Fans did the whole day in the name of Priyanka, wrote- We are all proud of you

Rakhi Sawant took a special gift for Rahul Vaidya’s wife Disha Parmar, showed the video and said – come to my wedding next year