Can Ekta Kapoor be arrested after Raj Kundra? 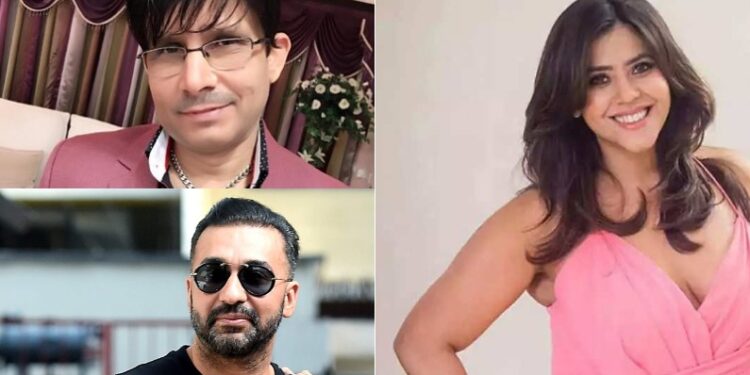 After the arrest of Raj Kundra, husband of actress Shilpa Shetty, many big revelations are being made. Before arresting Raj Kundra, the Crime Branch had investigated the matter for several days, in which pornographic films were made. In this, the name of Shilpa’s husband was revealed. Now in this case, Kamal R Khan has also dragged the name of such a celeb, knowing that the fans are going to be surprised.

Yes, Kamal R Khan is very active on social media and openly expresses his opinion on every issue. Now after the arrest of Raj Kundra, KRK has shared a video on Twitter, in which Ekta Kapoor is being talked about.

Know what is the whole matter

Actually, while sharing a YouTube video, Kamal R Khan has written on Twitter that in this video it has been said that #EktaKapoor can be arrested, long ago Raj Kundra had said, after me his number will be taken, will be arrested. “

Kamal has also shared that video with this caption. Let us tell you that in this video it has been said that a chat of 10 November 2020 has surfaced on social media, in which Raj is seen talking to Umesh Kamat, sharing an article which says how Mumbai The Crime Branch has sent summons to 7 app users who run their OTT platform for obscene content on them, which also includes the name of Ekta’s Alt Balaji app.

This video says that #EktaKapoor can be arrested. #RajKundra said long ago- I will get his number after me, will be arrested”! https://t.co/8ax99As2Y1 via @YouTube

However, it has been clarified by the police that they have sufficient evidence against Raj Kundra. In such a situation, it can be said that the troubles of Raj Kundra are going to increase a lot.

Also read- Shilpa Shetty shared this post before the arrest of Raj Kundra, wrote – Power to change what is happening around….

Is Rani Chatterjee going to get married? Photos of bridal look went viral