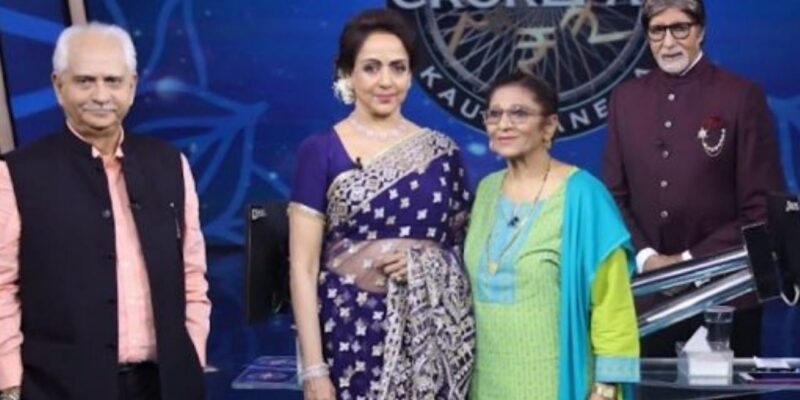 This week ‘Shandaar Shukarvaar’ episode of ‘Kaun Banegi Crorepati’ season 13 is going to be very funny. After many years, there will be a re-union of the stars and makers of the film ‘Sholay’ through KBC 13. During this, Bollywood’s first stuntwoman Reshma Pathan will be seen in the ‘Fantastic Friday’ episode of ‘Kaun Banega Crorepati 13’. Actually, Hema Malini is celebrating her 73rd birthday on October 16, so Reshma Pathan has been invited on the show to surprise Hema Malini.

Reshma Pathan, who played Hema Malini’s body double for all the stunts in the famous film ‘Sholay’, will come as a surprise. As soon as she comes, she speaks the dialogue, Oh Basanti, happy birthday… Recognize me? Hema Malini is shocked to hear Reshma’s voice. Let us tell you that Reshma was the first stuntwoman of the industry and she is known as ‘Sholay Girl’.

Talking to Reshma, Hema Malini said that you have played my body double in ‘Sholay’ and because of all the tough and dangerous shots you did, I became famous. I remember all that and, I also remember that during the shoot, we spent a lot of time together. While praising Hema Malini, Reshma Pathan says that you have never thought of me as your body double. You have always treated me as a heroine (colleague artist). For you, even if I have to give my life in one shot, I will give it.

Celebration of 46 years of ‘Sholay’

Bollywood star Hema Malini and ‘Sholay’ director Ramesh Sippy will sit on the hotseat in the show and will be seen answering questions from megastar Amitabh Bachchan. They will celebrate the completion of 46 years of ‘Sholay’. During the show, both will share interesting stories and behind-the-scenes moments from the film.

During this, Dharmendra will also meet his Sholay friends in KCB 13 through video call. During this, he will tell how he used to walk 28 miles to the shooting location of Sholay. Many promos of the show have been shared, in which Hema Malini and Amitabh Bachchan were seen having fun. Amitabh had also shared an anecdote related to a scene from the film Shoal and told how it took him three years for a shot of that scene.

Also read- Drugs Case: Will Aryan Khan and his associates get bail today? Arbaaz-Munman’s lawyer said these things before the hearing

Lookalike: Hollywood actress Gal Gadot looks like Liss, you will be surprised to see the photos

T20 and ODI player, record made in first century itself, making a comeback from mental illness