Blurr: Taapsee Pannu announces her production house’s first film, to be released in 2022 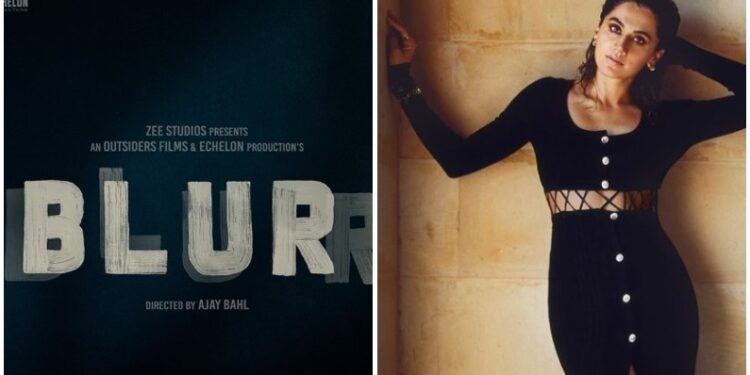 Taapsee Pannu has announced her first film from her production house Outsider Films. Taapsee Pannu herself will also be seen as an actress in this film.

After South, Taapsee Pannu has also proved her acting skills in Bollywood. He has made many hit films to his name and in the coming days also he has many big projects. Now in the meantime, Taapsee has made a big announcement. Taapsee has now decided to become a producer and now she is going to show her amazing as a producer.

Taapsee has launched her production house Outsiders Films on Thursday itself. Everyone was congratulating Taapsee on this announcement that the actress has made another announcement. He has announced the first film from the production house. The name of the movie is Blur.

While announcing the film, Taapsee wrote, ‘And this is the first film of Outsiders Production Blur. Ajay Bahl will direct this film in which Taapsee Pannu is in the lead role.

What did you say by making the production announcement?

Last year I completed a decade in the Indian film industry. I never knew that I was going to not only swim here but would actually learn to swim my own way. Who never thought that she would become a public figure, today she is saying thank you to all of you for your love and trust. Now the time has come for you to payback because with great power comes great responsibility. So pray for me and I promise to bring the best for you because the view from outside will be good. I am about to write a new chapter of my life as a producer from Outsider Films.

Will outsiders be given a chance?

With the name of Taapsee’s production house, it seems that she can help outsiders to get work in Bollywood as she herself was an outsider. Well now through the first film Blur which outsider she gives a chance, it will be known in the coming time.

She could not do wonders by becoming a beautiful Dilruba

Now Taapsee says that she is going to do the best as a producer, but recently she could not win the hearts of the audience as an actress with her film Haseen Dilruba. Actually, Taapsee was quite excited about the film Haseen Dilruba. Taapsee also promoted the film a lot through social media. But the film and Taapsee got mixed response from the audience and critics. However, a lot of negative comments were coming about the film on social media. When Taapsee was asked about the poor reviews the film was getting, she said, “Discussions, it is good to debate, but it should be in the tone of debate.” As an audience, tell us what did not suit you. But this does not mean that you speak wrong, which can make many people feel bad. Use your rights properly.

read this also- Shershaah Teaser: Sidharth Malhotra as Kargil hero Vikram Batra will lick the enemy’s dust, the film will be released on this day